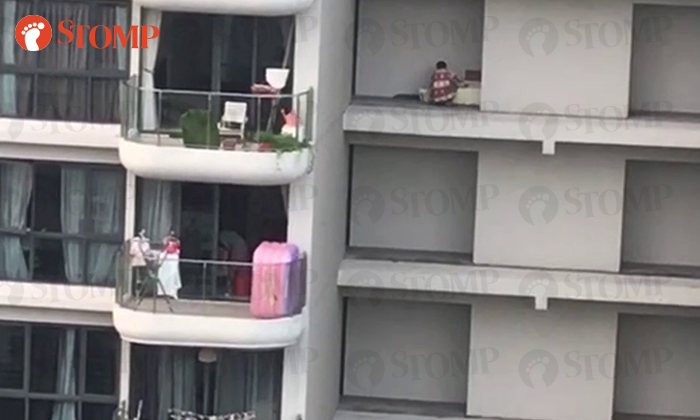 We have all heard about dangerous acts involving people recklessly climbing up onto ledges at high floors, but this man took things to a whole new level (pun intended).

He had placed his belongings on the 12th storey ledge of Riversound Residence, a condominium building in Sengkang East, and was rummaging for his items there.

Stomper Hoon came across the sighting this morning (Sep 27) at around 7.40am.

A video that she filmed shows the resident squatting down on the ledge, where he appeared to have placed multiple items.

In a phone interview, Hoon told Stomp that she had noticed the items on the ledge for months, but it was the first time she actually saw the man there.

She added: "First, there was the case of teens sitting on the ledge at Riversound Residence.

"Now, it's a man who finding something from his personal storage area on the ledge,"

The management of the condo issued an official statement in response to Wilson's video and also told Stomp that it issued Advisory Notices to all residents to promote better safety awareness.

Stomp has reached out to Riversound Residence's management regarding Hoon's video.