Stomper wakes up to see watermelon 'frothing': This might be why 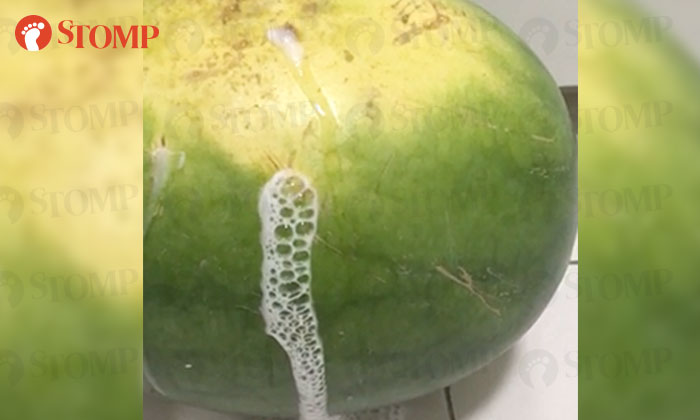 Stomper Janesse woke up to a bizarre sight on early Wednesday morning (May 30) — white bubbles pouring out from a watermelon that her husband bought the night before.

Janesse told Stomp that her husband had gotten the watermelon from a supermarket near their place at Edgevale Plains at Punggol, between 7pm to 8pm on Tuesday night (May 29).

As the couple was exhausted, they simply left the watermelon on the kitchen floor, reasoning that they could cut it up the next day and store it in the refrigerator.

When Janesse woke up at about 5am on the day of the incident, she found bubbles seeping out from the watermelon and viscous liquid pooling at the bottom of the fruit.

Said Janesse: "I didn’t know what the liquid is.

"I called my husband to come and take a look. We were all amused.

“The watermelon had been in a good condition the night before.

“It was the first time that such a thing has happened to us.”

Janesse added that she and her husband did not go back to the supermarket for an exchange as she had placed the receipt into a lucky draw pool, and thus had no proof of purchase.

The incident comes after a clip of the same phenomenon went viral on YouTube in 2015.

Back then, a man had bought a watermelon in Sham Shui Po, Hong Kong, and was surprised when his watermelon started foaming as he washed the fruit.

In an article by ejinsight dated June 15, 2015, Cheung Chi-cheung, vice chairman of the Kowloon Fruit and Vegetable Merchants Association, had said that the watermelon could have been overripe, causing bubbles to escape from the pulp that was starting to rot.

He also added that the act of injecting sweeteners into fruits is illegal, but the use of organic treatments while planting fruits is not uncommon.

A biochemistry professor from the City University of Hong Kong also weighed in on the issue, saying that it is common practice for farmers to use growth hormones on watermelons which may result in the bubbling phenomenon observed.

However, he added that these hormones pose no health risks.

Related Stories
Yikes! What's this black substance found in fish bought from supermarket?
Lau Lup gets freaked out by strange-looking fungi growing on tree at Hougang
You've seen lizards around, but have you seen one with a green head?
More About:
fruits
weird
bizarre
unusual