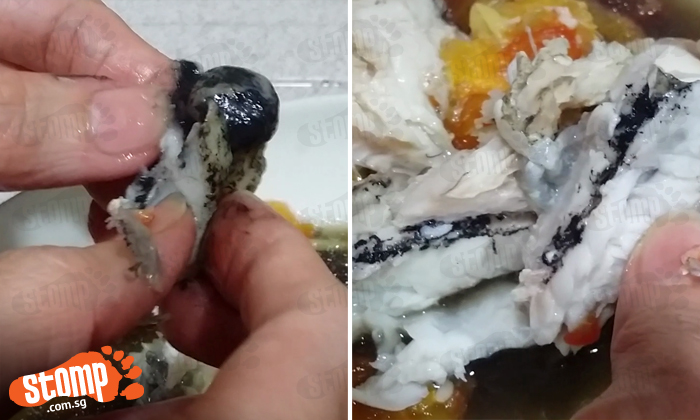 Stomper Jeanette and her husband were shocked to discover a black substance inside a grouper that that they were halfway through eating yesterday (Feb 13) at around 4pm.

Upon further inspection, they also found a black coloured blob inside the fish that could not be broken even after being pressed, as seen in a video that they had filmed.

"This grouper was purchased at Rivervale Mall's NTUC on Sunday (Feb 12).

"It was cleaned and prepared by the fish section before I brought it home.

"It looked fine even after steaming and we started eating it from the cheek.

"But after eating it for awhile, I poked my chopstick into an area near its stomach and that's when I discovered the substance.

"A black solution was flowing and eventually a 'PIECE' was discovered."

The couple believes that the blob is coagulated grease.

Jeanette also told Stomp in a phone interview that she has kept the fish in her refrigerator in case relevant authorities would like to inspect it.