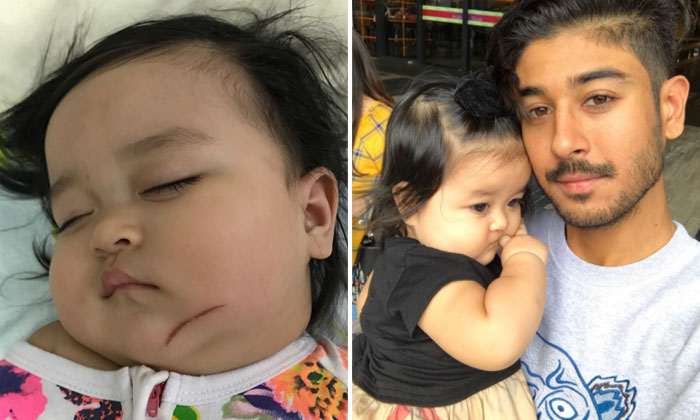 A luxury boutique is probably the last place you'd expect to get hurt, but that's what happened to Singaporean singer Harris Baba, when a hot light fixture in the shop fell from the ceiling and on to his 9-month-old baby girl.

The incident at a Louis Vuitton boutique in Kuala Lumpur on Monday (Oct 30) caused baby Aleena, nicknamed "BomBom", to suffer second degree burns on her face and hands.

The Malaysia-based actor, who got his showbiz break after participating in the 2013 reality singing competition The Final 1, described the incident in an Instagram post on Tuesday, adding that he has "engaged a really good lawyer to sue and fine the boutique".

"The wound will take months to heal and we will have to send her for laser afterwards to remove the scar," he wrote.

"We take care of Aleena so well but due to other people's negligence and mistake, Aleena had to pay the price."

On Thursday, Harris posted more photos of Aleena's injuries, and clarified that he is not suing the boutique located at the upmarket The Gardens Mall for money. Instead, he hopes to ensure that the accident doesn't happen again "to someone else's son or daughter or to anyone".

"It's so sad, disappointing and embarrassing to know that so many people think I'm suing and fining the Louis Vuitton boutique at The Gardens just for money," said Harris.

"I'm suing and fining them so that they never take this matter lightly ever again."

He added: "As a father I cant bear to see my 8-and-a-half month old baby girl like this in such a situation. How do you expect me to forgive and forget so easily."

Harris' posts on Instagram have so far received more than 50,000 likes combined, with many commenters voicing their support.

Baby Aleena is the first child for the 26-year-old, who is of Pakistani, Kashmiri-Iranian and Chinese descent. The Zayn Malik look-alike married his Singaporean sweetheart last year.

Despite getting kicked out of the The Final One after making it to the top 40, the singer-turned-actor has gained popularity across the Causeway for his roles in local television dramas.