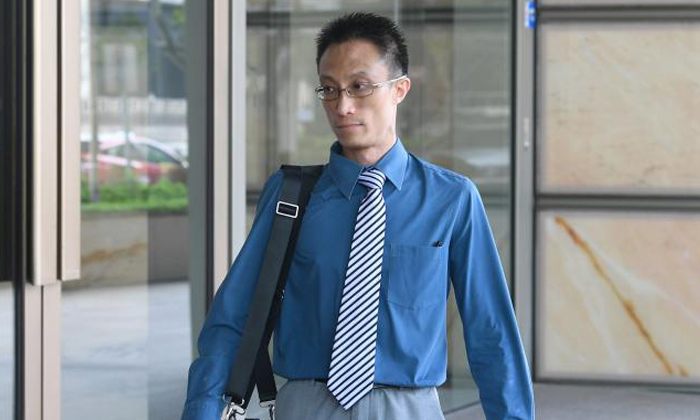 The Singaporean doctor involved in the HIV Registry data leak scandal allegedly used his medical skills to inject drug abusers, the court heard on Thursday (May 30).

Ler Teck Siang, who is 38 this year, is accused of providing "slamming" services, street slang for administering illegal substances by injection.

Deputy Public Prosecutor Nicholas Wuan said Ler was so proficient at it that the word spread and reached the ears of a Sim Eng Chee who engaged his services.

"This is a case of a medical practitioner who knows no bounds in betraying his professional and ethical standards in pursuit of his self-interests," added the DPP.

The former head of the Health Ministry's National Public Health Unit is on trial for two drug-related offences.

Ler is accused of administering methamphetamine, also known by its street name Ice, to Sim in a room in Swissotel The Stamford hotel on Feb 26, 2018.

He is also charged with possessing utensils intended for drug use at the Conrad Centennial Singapore hotel lobby on March 2, 2018.

Another charge of failing to provide a urine specimen to a Central Narcotics Bureau officer was stood down for this trial.

The prosecution team, comprising DPP Wuan and Desmond Chong, on Thursday said they will set out to prove that Sim was introduced to Ler for his "slamming" services some time in the second half of 2017.

At that point, Ler was already facing charges of abetment for cheating and giving a false statement to a public servant.

He was charged in court for these offences related to the HIV data leak, which involved his American partner Mikhy Farrera-Brochez, in June 2016.

Prosecutors said Sim had engaged Ler's "slamming" services on a number of occasions and had done so last year on Feb 26 and again on March 2.

On March 2, the hotel staff discovered drugs and drug-related paraphernalia in Sim's hotel room and the authorities arrested Ler and Sim after they were called to the scene, said prosecutors.

The authorities also found a syringe, two straws and a bottle on Ler.

When questioned why he had these items with him, Ler said that he “is a doctor”, and that he used them for himself, a former hotel security staff, who was present on March 2, testified in court.

But traces of methamphetamine were found on the items, the prosecutors said in their opening statement.

“When the law finally caught up with him, the accused showed no remorse, and even tried to use his status as a doctor to protest his arrest,” said the prosecutors.

Ler, who is representing himself in the trial, was convicted of cheating-related offences last September.

He is serving a two-year jail sentence for helping his HIV-positive partner Farrera-Brochez cheat the authorities into issuing him a pass to work here.

Ler had submitted his own blood sample in place of Farrera-Brochez's, so the American could pass medical tests to work here.

Farrera-Brochez had obtained the names, addresses, contact details and medical information of some 14,200 HIV-positive people before leaking them online.

Ler, who was head of the National Public Health Unit between March 2012 and May 2013, also faces a charge under the Official Secrets Act for failing to take reasonable care to retain possession of the information regarding the HIV-positive people.

His medical registration has been suspended for nine months following his conviction for cheating.

The trial related to the drug offences will continue on Friday.