Wow! Changi Airport handled a record of 58.7 million passengers in 2016 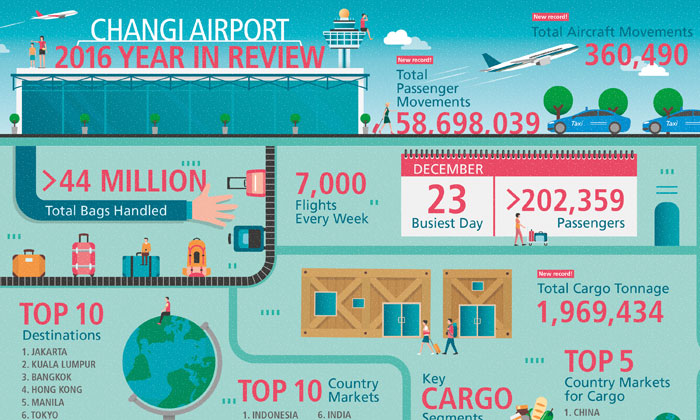 The overall traffic growth was due in part to a rising number of Chinese travellers.

From fifth spot, China moved to become Changi's third largest country market - after Indonesia and Malaysia - with a 15 per cent jump in traffic.

Last year, routes to South-east Asia, North-east Asia and Oceania accounted for 90 per cent of the growth in Changi's passenger traffic, said the airport.

The number of aircraft landings and take offs increased by 4.1 per cent to 360,490 while total cargo volumes grew by 6.3 per cent to reach a new high of 1.97 million tonnes.

Changi Airport Group's chief executive officer Lee Seow Hiang, said: "Despite a backdrop of economic and socio-political uncertainties, we maintain a positive outlook for the year ahead. We see opportunities in emerging markets within Africa and Eastern Europe. At the same time, we will continue to grow our long haul routes to Western Europe, and strengthen our connectivity within the region to secondary cities in South East Asia, China and India."

"We have observed emerging trends such as growth in the self-transfer and fly-cruise segments, and will continue to work with our partners to develop innovative solutions to better serve passengers" he said.

Related Stories
Singaporeans, did you know that your passport is the 2nd most powerful in the world?
Friends and families waiting for loved ones arriving from Hokkaido...you've got to wait a little longer
So THAT's what all these stones on train tracks do
Changi airport
travel
travelling
interesting
cool
tourists