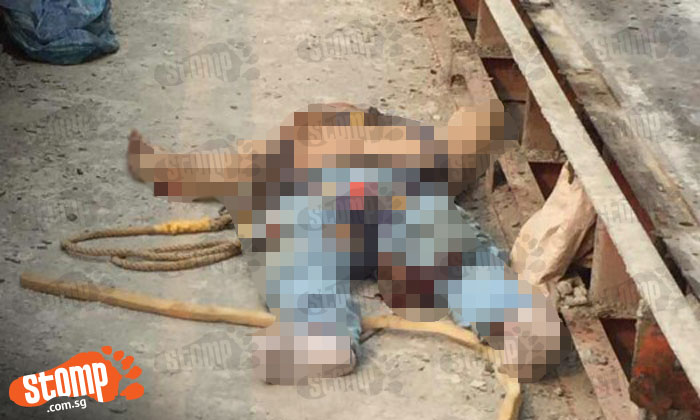 A construction worker from China was pronounced dead after falling from seven storeys at a worksite at Woodlands Close on Aug 28.

Two Stompers sent Stomp photos of the 33-year-old worker after he fell.

A Ministry of Manpower spokesperson provided Stomp with the following information regarding the fall:

"It was reported that at about 0855hrs, a team of workers was installing formwork for the concreting of a column on the seventh storey of a building under construction, when one of the formwork panels fell over the edge of the building.

"A worker in the team fell with the panel.

"The worker was later pronounced dead at the scene."

"The Developer for the construction project is Wee Hur (Woodlands 12) Pte Ltd and the Main Contractor is Wee Hur Construction Pte Ltd."

"The cause of the accident is being investigated. Ministry of Manpower has issued a Stop Work Order on all formwork and lifting operations.

"Employers and Contractors are reminded to establish and effectively implement clear procedures to safely install and dismantle formwork.

"If lifted by a mobile or tower crane, a formwork panel should always be properly supported and secured prior to being released, to prevent accidental toppling."

According to The Straits Times, there were 42 workplace fatalities in the first half of this year, compared with 30 in the same period last year.

Another worker from China in his 30s, who declined to be named, was surprised to hear of the accident at his worksite. "There was never a problem with the panels. I don't know why something went wrong."

A Wee Hur spokesman said the victim was employed by one of its sub- contractors. He leaves behind his parents, wife and children.

Related Stories
Worker whose fingers were crushed by falling metal gets just 1 day of medical leave
Bangladeshi construction worker who was paralysed after getting knocked down by forklift gets $600,000
More About:
death
foreign workers
fall
construction