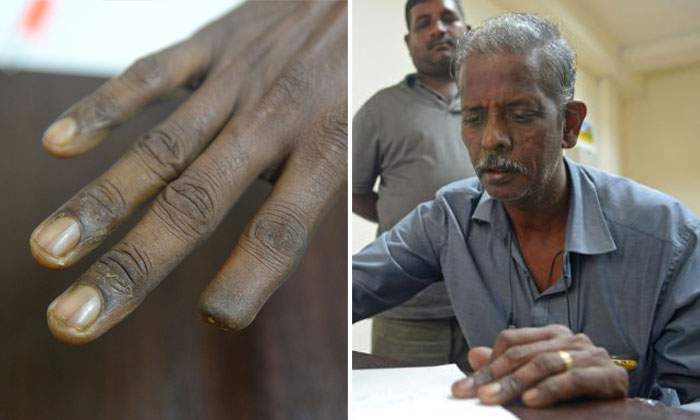 The tip of shipyard worker V. Anbazhaga's right index finger is missing. It was crushed by some falling metal last September, when the 57-year-old from India was at work.

The mangled fingertip had to be amputated. But an orthopaedic practice at a well-known private hospital gave Mr Anbazhaga only one day of medical leave and three months of light duties.

His boss never reported the injury, he said. Nor were there any light duties available, and he soon found himself on a Special Pass, unable to work. He has now engaged a lawyer to pursue injury compensation.

The issue of errant doctors not giving injured workers enough medical leave has come under the spotlight again, after the top court said it would come down hard on such offenders in judgment grounds released last Wednesday.

In May, the court suspended Raffles Hospital orthopaedic surgeon Wong Him Choon, 51, for six months, following an appeal by the Singapore Medical Council.

In 2011, Dr Wong had operated on construction worker Fan Mao Bing's broken hand, but gave the Chinese national just two days' medical leave and certified him fit for light duties for a month after that.

Judge of Appeal Andrew Phang wrote in the grounds: "It should not be the case that a patient has to 'kneel and beg' (as the patient in fact did, according to Dr Wong) for medical leave that he was in any case entitled to on proper clinical grounds."

Migrant worker groups applauded the stern stance, saying it was a long-overdue step taken to address a widespread problem.

The Humanitarian Organisation for Migration Economics (Home) is planning to file complaints against at least four more orthopaedic surgeons. It first filed the complaint against Dr Wong in 2011 on Mr Fan's behalf.

Social worker and former Home executive director Jolovan Wham said the group sees a few dozen such cases every year, and the doctors involved are usually from private clinics and hospitals.

Mr Wham said if the worker receives a medical certificate (MC) of three days or less, or was hospitalised for less than 24 hours, the employer need not report the accident to the Manpower Ministry (MOM).

He can keep his safety record clean and also avoid higher insurance premiums in the future.

Said Mr Eric Lee, outreach coordinator at migrant worker community clinic Healthserve: "These doctors take instruction from the employers because they are the paymasters."

Transient Workers Count Too (TWC2) treasurer Alex Au estimated that one in four of the injured workers they helped has received insufficient MCs.

TWC2 committee member Debbie Fordyce said she has seen cases where workers recovering from serious injuries were kept on site and given light tasks.

One had had a craniectomy - surgery to remove part of his skull - but was told to dispense equipment to his colleagues. Another, whose leg had been crushed by a forklift, was left in an office but was "too sick to even sit".

Dr Andrew Chin, head of the Singapore General Hospital hand surgery department, said doctors should check if light duties are available at the patient's worksite and of what variety. "Under any circumstances if they are not available, or if the doctor is in doubt, then medical leave should be given."

Hand surgeon Andrew Yam, who has treated injured foreign workers for over a decade, suggested that MOM require all injuries be reported, and not just those with more than three days' MC.

Companies' safety records should be affected instead by the level of permanent incapacity rather than the number of days' MC.

Employers, however, may have their own problems with managing injured workers.

Singapore Contractors Association (SCAL) executive director Lam Kong Hong said: "For every story like (Dr Wong's), there's another story of workers who take advantage of employers by hopping from one clinic to another, getting MCs extended, or undertaking operations for $10,000, $20,000 that the employer only finds out about later."

While the court's judgment may spell more adequate rest for injured workers in the future, it is too late for Mr Fan, who has since returned to China. Mr Wham said they had lost touch with him. "He may never know that he won."

1. Last September, worker V. Anbazhaga's finger was crushed. The fingertip had to be amputated (left). An orthopaedic practice at a private hospital gave him only one day of medical leave and three months of light duties.

2. In 2011, orthopaedic surgeon Wong Him Choon operated on construction worker Fan Mao Bing's broken hand, but gave the Chinese national just two days' medical leave and certified him fit for light duties for a month after.

3. If a worker receives a medical certificate of three days or less, the employer need not report the accident to the Manpower Ministry. He can keep his safety record clean and also avoid higher insurance premiums in the future.