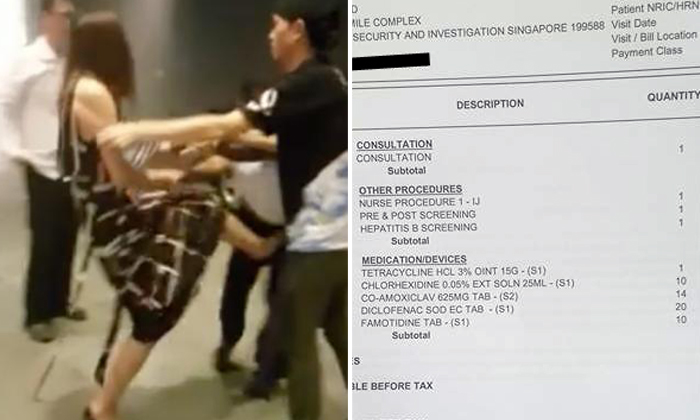 Police are investigating an incident involving a woman who was caught on camera in a tussle with a taxi driver and a security guard, after she allegedly tried to evade paying her cab fare.

The incident, which occurred at Enggor Street at around 11pm on Wednesday (Dec 7), sparked outrage after two videos showing the dispute were uploaded online by Facebook user Isaac Cheng.

Stomper Eyeza alerted Stomp to them after coming across them on Facebook.

The first clip shows the woman hitting the cabby with her handbag, which the latter can be seen latching on to, presumably to prevent her from leaving.

The woman also hurled vulgarities and challenged him to call the cops.

In the second video, the woman can be seen repeatedly hitting the female security guard. She then kicked her in the groin despite wearing high heels.

The woman was also tussling with another man, known as Lim, who is an employee of a Japanese restaurant nearby.

According to Shin Min Daily News, the woman had barged into the restaurant and caused a ruckus.

Lim had asked her to leave but she refused. He found out about the earlier altercation only when he led her out of the eatery.

Police said that they were alerted to a case of voluntarily causing hurt at 11.13pm, and that investigations are ongoing.

Shin Min reported that the security guard was on medical leave and did not go to work the following day (Dec 8).

Stomper Edwin also alerted us to a post by Facebook user Scheena Phil, who weighed in on the incident and shared a photo showing the guard's medical bill, which totaled $179.48.

She said in her post dated Dec 8, "My guard had to go to a clinic which costed her $179++ because she isn't local. Hope she is able to claim from her company though."

In addition, the Union of Security Employees (USE) said in a Facebook post, also on Dec 8, that the security guard belonged to one of its unionised agencies and that it has offered its assistance to the company.

"USE expects all stakeholders to show respect to our security officers and reiterate that any form of abuse towards the officers is unacceptable," it wrote.

A Dec 9 update on the same post said that the USE has contacted the company, which "will cover the medical costs incurred due to the incident."