Pretty woman, but ugly behaviour: She attacks female security guard and even kicks her in the groin after evading taxi fare 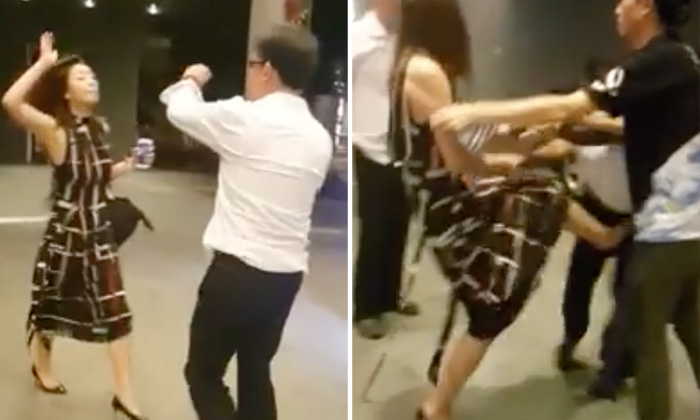 Stomper Eyeza alerted the Stomp Team to two viral Facebook videos depicting a woman brutally hitting a taxi driver and kicking a female security guard, simply because she refused to pay the taxi fare in Singapore.

The first video shows the male taxi driver grabbing onto the woman's handbag, afraid that she would try to escape.

The woman reacts by hitting the cabby and asking him repeatedly to let go of her handbag.

The woman is then heard saying, "I have a lot of money!"

She then shouted profanities at the driver and challenged him to call the police.

In the second video, the woman is spotted hitting a female security guard who tried to intercede and help.

A worker from a nearby restaurant is seen holding both women's arms to prevent another physical fight from breaking out.

The taxi driver is heard shouting, "Oi! She used the phone to hit her (security guard) head eh!"

The woman, who was wearing a pair of high heel shoes, then lifted her right leg and kicked the security guard in her groin.

The security guard bravely stood there and held the woman's hands to prevent her from further hitting anyone, while the aggressive woman continued to taunt and hurl vulgarities.

Towards the end of the video, the female security guard is seen showing her hand that is scarred and slightly bloodied from the attack.

Related Stories
Brawl breaks out between two groups at St James, Police have to break them up
Wah, 'gangsta' sia! Biker challengers driver to a fight on AYE
28-year-old victim left in pool of blood at Orchard Plaza fight was kicked and punched for 3 minutes
fight
attack
dispute
argument
woman attacks cabby and kicks guard