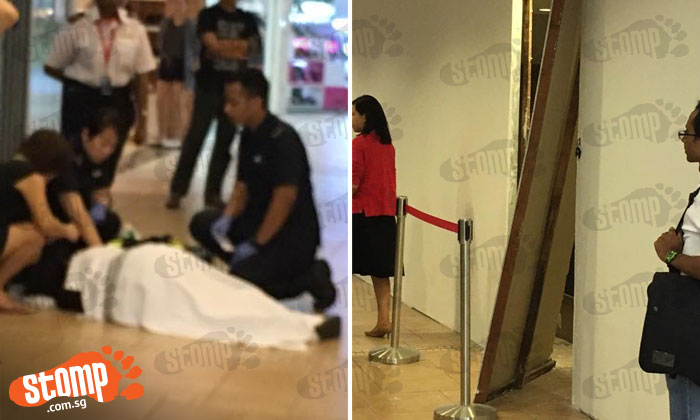 Stomper Helen was at Thomson Plaza this afternoon at around 3pm when she saw a woman lying on the floor in front of Amore Fitness.

According to people on the scene, the woman had been hit by a wooden door.

In a photo that Helen sent to Stomp, the opposite store space appears to be blocked off and under renovation.

The door appears to be off its hinges and leaning against the door frame with a barricade placed in front of it.

"Members of the public were trying to help her up but were unable to.

"A while later, I saw paramedics come to assist the lady.

"As I am afraid of blood, I didn't dare to go near enough to see the condition of the victim."

"SCDF was alerted of the incident at around 3pm.

"We dispatched one ambulance to the scene.

"A female Chinese in her 50s was conveyed conscious to Tan Tock Seng Hospital."