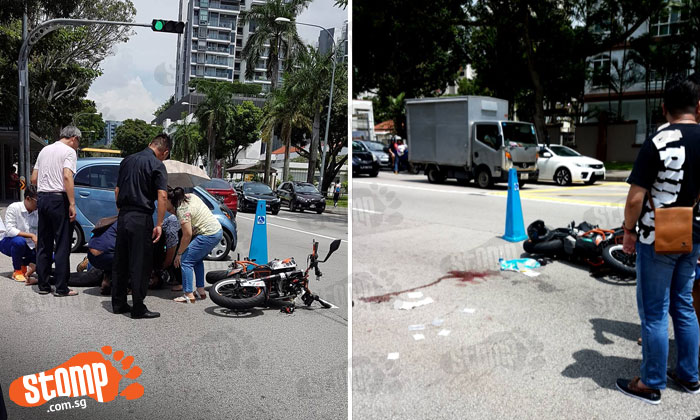 Stomper Canave alerted Stomp to an accident involving a motorcycle and a van that took place today (Feb 4) at around 1pm along Tanjong Katong Road outside the Church of Our Lady Queen of Peace.

According to the Stomper, the driver of the van was turning out of Gray Lane, a slip road along Tanjong Katong Road.

A young motorcyclist who Canave said was travelling at a fast pace on the main road then crashed into the front of the van.

The motorcyclist was unconscious after the accident. A trail of blood can also be seen on the road.

"I think the blood was coming from his arm. It was in an awkward position.

"There were people with first aid kits at the scene. They may have been members of the church.

"Passersby also wanted to give the victim water.

"However as he was injured, they decided not to move him."

"The van driver did not seem to be injured and was interviewed by a Traffic Police Officer."

Stomper A also sent Stomp a video showing the aftermath of the accident.

In the video, a group of passersby can be seen around the victim.

There were also paramedics at the scene rendering aid to the motorcyclist while a few individuals shielded him from the sun with umbrellas.

"We dispatched one ambulance and conveyed a male Malay in his 20s to Tan Tock Seng Hospital."