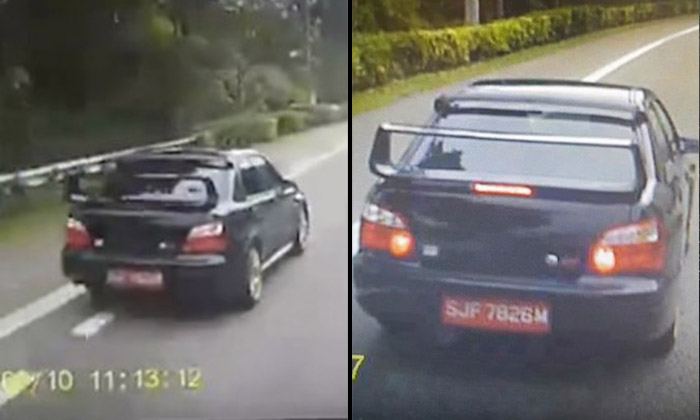 Two lorry drivers ended up colliding with each other after one of them tried to avoid crashing into a Subaru driver who abruptly cut into their lane and played the braking game.

One of the lorry drivers posted his car-cam footage of the incident on Roads.sg.

He explained that the driver of Subaru SJF7826M abruptly cut into his lane, so he flashed his lorry's high-beam in response.

The Subaru driver jammed on his brakes and the lorry driver also did so to avoid a collision.

However, another lorry driver who was behind these two vehicles was unable to avoid the lorry in front.

The two lorries crashed into each other, and the Subaru speeds off into the distance.

The lorry driver said in the video's caption:

"This video is to serve as evidence that you have caused this accident and a police report has been made.

"Both lorries will claim from you for your road rage action and TP will follow up with you for prosecution of dangerous driving and road rage."

The police confirmed that a report has been lodged over the incident and that investigations are ongoing.

On their Facebook page, the SPF also advised anyone with information about the incident to write in to them via the E-Feedback On Road Users portal or tot he Taffic Police at SPF_Feedback_TP@spf.gov.sg.