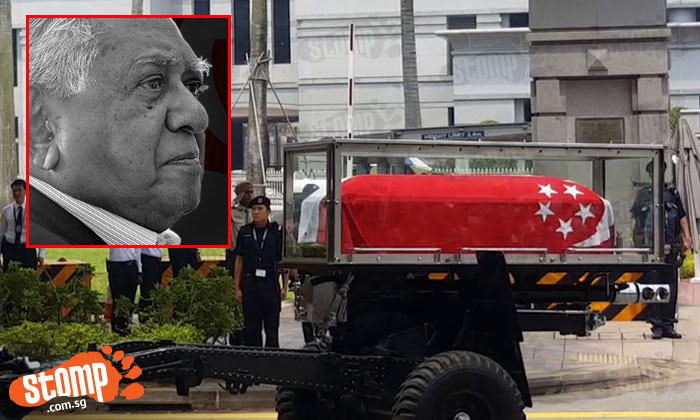 Like many, Stomper K went down to the Parliament House yesterday (Aug 26) to pay his last respects to Singapore's longest-serving president Mr S R Nathan.

He shared his experience in an email to Stomp:

"Despite the sudden haze that shrouded the island since morning, a crowd was waiting anxiously in the vicinity of the Parliament House to bid Singapore's former president goodbye for the last time.

"At about 2pm, Mr S R Nathan embarked on his final journey through Singapore.

"Those who were facing the entrance of the Parliament House had a clear, unobstructed view of the pallbearers carrying Mr Nathan's casket and placing it onto a ceremonial gun carriage.

"A sombre mood descended as the ceremonial gun carriage drove out of the Parliament House, some of them chanting "S R Nathan, S R Nathan".

"Undeterred by the the heat and the haze, many people from all sections of the population turned out to have a final look at the Mr Nathan and bid him farewell.

"It was truly a fitting tribute to the former president many loved."