Spooky encounter at Sembawang forest: Banana tree sways even though there is no wind 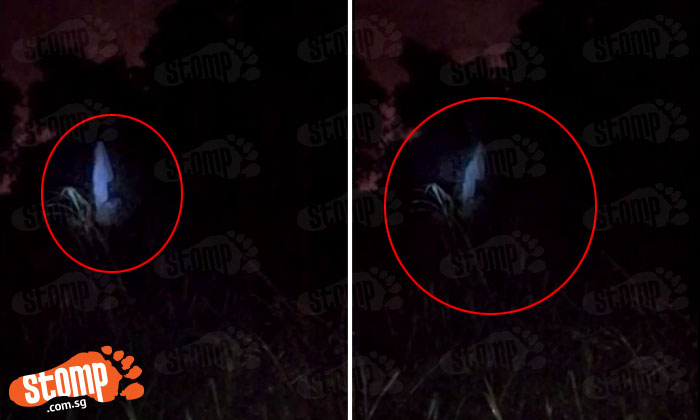 Stomper Hilfan and his friends enjoys scary encounters and exploring spooky places occasionally, and this time they checked out two spots in the Northern parts of Sg -- Sembawang and Seletar.

They went to the forested areas next to the GEMS World Academy school (in Seletar) and Masjid Kampong Wak Hassan (located at 27B Jln Mempurong), on Friday (Dec 23) and Sunday (Dec 25) respectively.

During both instances, they started exploring at around 9pm and headed for home at around midnight.

They had gone to these two places as they had heard from friends that these were some really scary places.

While they did have a few encounters with the supernatural, the one which really stood out to them would have to be the 'dancing' banana tree leaf at the ulu Sembawang forested area.

"The banana tree was swaying on it's own and there was no wind at all!"

As seen from the video sent in by the Stomper, the rest of the plants were not swaying except for this one banana tree leaf... spooky huh!?

"We went in there to look for this old kampung which we heard was still there, but we could not find it that day.

The second video sent in by the Stomper features his little adventure through the Sembawang forest. The video features several offerings on tomb slabs. According to the Stomper, there are some burials in the forest as well.

The images sent in by the Stomper were taken using a night vision app as they were not able to see clearly in the darkness.

"When we were leaving the Sembawang forest, we heard people crying and prayers being performed -- but there was nobody there.

Friday's adventure at Seletar however, was more thrilling.

"We saw many ghosts as compared to the only one we saw at Sembawang.

"There was a random altar and plantation in the middle of the Seletar forest as well. (images in gallery)

"It was our first time there, and we walked really slowly. We heard people calling for us, but we ignored.

"We definitely felt creeped out and got a lot of goose bumps, but both experiences were interesting.

"We will be going back to the Sembawang forest to look for the old kampung again soon.

Stomper Hilfan advises those interested in such spooky adventures to always make sure to go with really brave people, and to not disturb the ghosts.

"Go in peace and come back in peace, don't go near them or anything."