Woman's selfie of 'ghost' in her car is so freaky 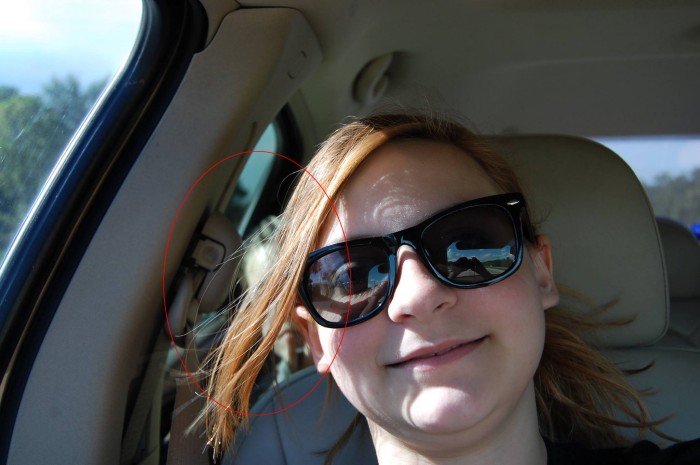 This mother of two from Florida found a ghost boy sitting in the backseat of her car after taking a selfie. And if that's not spooking you out just yet, Distractify also has photographic evidence.

Melissa Kurtz's daughter, Harper, took this (totally normal) selfie in the passenger seat of the car, but little did she realise that the photo she took was anything but normal.

Look at the photo closely and you'll notice a little ghost boy in the backseat of the car, leaning against the back window.

And the most epic part about this? Melissa did not even notice the unexpected visitor in the photo until a month later, when she was going through her photos on her camera.

""It was a real 'Oh my god' moment," Melissa told The Daily Mail. "I was really shocked by it, incredibly shocked. I ran into the other room and said to friends who were staying with me 'you have to see this.' Everyone was awestruck."

Melissa believes that the little ghost probably showed up to warn Harper to wear her seatbelt.

We agree that she does have an interesting deduction.

"[Wearing her seatbelt] is something I yell at her about all the time," Melissa told The Daily Mail. "I’ve had 13 traffic tickets in two years due to her not wearing one. She is very stubborn though – I’m always trying to catch her when she hasn't got it on."

Paranormal experts have also weighed in on the photo.

According to Greg Pocha, director of parapsychology, afterlife and paranormal studies at Eidolon Project Canada, the ghost was indeed warning Harper about the seatbelt, reported Daily Mail via Distractify.

Apparently, this kind of analysis of paranormal motive is called spectral profiling.

But here is where things get spookier.

The location where the photo was taken has a tragic past.

"Where the picture was taken there was an automobile accident one year ago exactly," Melissa said. "When I looked into it, someone had been medevaced away in a helicopter. However, they would not tell me any specific details when I enquired, which leads me to believe that it was a child."

And according to Pocha, this would explain why the ghost boy was still there.

"Ghosts such as the boy are prone to remain earthbound when the soul is literally ripped or thrown from the body in an accident," he said.

"Chances are that he does not know that he has died. And chances are good that he will haunt this part of the highway forever."

Looks like everyone is going to start double checking their selfies from now on.