SMRT investigating claims that story of SMRT cabby who returned $235,500 to Thai passenger is false 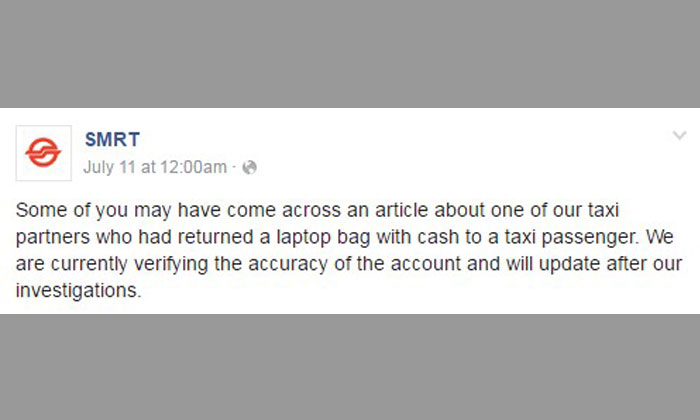 After news circulated of an honest taxi driver who returned a laptop bag containing $235,500 in cash to a Thai businessman, a blogger has written a detailed post highlighting that it was all a hoax.

The blogger, Soong Hoongji, uncovered that the cabbie, Lee Kenny and the businessman, Cukamon Khammat, are actually Facebook friends.

He dug up conversations between the two men that dated back to 2010.

Soong also said that he did a Google Reverse Image check on the money picture that was used and found out it was a picture that had been circulating on the internet since 2012.

SMRT has since released a statement on their Facebook page on July 11 saying that they are verifying the story:

"Some of you may have come across an article about one of our taxi partners who had returned a laptop bag with cash to a taxi passenger. We are currently verifying the accuracy of the account and will update after our investigations."

The cabby also posted his side of the story on the same day saying that he never denied knowing the passenger.

"WILL A PERSON SLAP HIS OWN FACE? If i want cooked up story i can say more wonderful content to enhance everyone believing....instead i am so heat up when i saw the posting of me being a bankrupt." (sic)

The blogger wrote that he had not hidden agenda for digging up these details:

"There is no malicious intention of me by posting up this post. I just lay out the facts for everyone to judge if this is real or not. I do hope the story is real and the taxi driver is to be commended for such honest action."

Related Stories
Kind-hearted SMRT cabby goes out of his way to return $235,500 cash left behind by Thai businessman
More About:
controversy
facebook