Kind-hearted SMRT cabby goes out of his way to return $235,500 cash left behind by Thai businessman 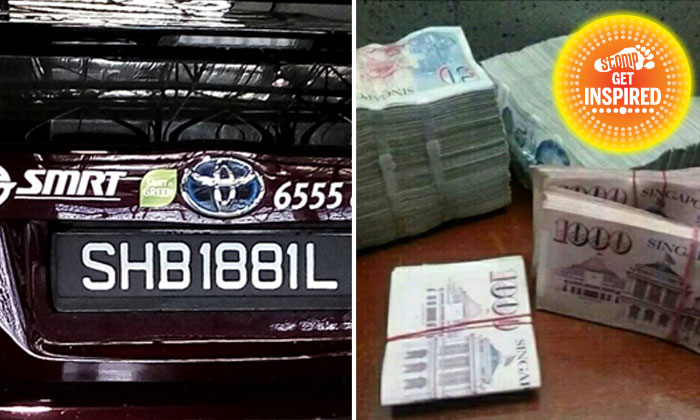 A cabby of SMRT taxi SHB1881L has garnered praise online after returning a bag containing $235,500 worth of cash to a Thai businessman who left it in his taxi.

The businessman, Chukamon Khammat, wrote an account of what happened to Beh Chia Lor - Singapore Road.

"I boarded this SMRT taxi SHB1881L at clarke Quay about 4am after a drinking session with some of my business partners. I was kind of drunk at that point of time. I told the driver to go to Marina Bay Sands Tower 1 where I am staying currently. I safely reached the location but I forgot my laptop bag. I immediately turned sober because that bag contained S$235,500 in cash.

"This money was given to me by investors in Singapore for business plans to be carried out in Thailand. I was supposed to be remit it in the morning. I broke down due to my worries about the consequences of losing this money. I cried in my suite.

"My wife woke up in a shock when she saw me breakdown. After knowing what happened, she said the money was gone and we surely have to bear the amount.

"I went down to the lobby anyway and my wife followed me with the mindset that I was obviously wasting my time. I should think of alternative ways to raise this sum and we even thought of mortgaging our house in Thailand and selling off all our assets.

"However, when the lift door opened, I saw a man coming in from the glass door panting and anxiously going towards the reception. I did not recognise him but he was holding my laptop bag.

"My wife and I ran towards him and shouted at him. When he saw me he took a deep breath and said 'thank God I found you sir'.

"At that point it was nearly 5am we were making a commotion in the lobby.

"I asked my wife bring up the bag and I urged the kind-hearted driver to wait as I needed to buy him a drink and offer my appreciation.

"However we ended up having a short chat in my suite.

"The driver did not request for any monetary reward but only asked if I could give him a ice cold mineral water. My wife immediately got it from the hotel bar fridge.

"I offered him $1,000 cash in appreciation of him returning this money. I got to know from this driver that he started driving a taxi because he went bankrupt in 2014. He started from scratch and was slowly repaying his debts ,

"This made me more surprised because if I were him, I would have taken the money to pay my debt.

"The cabby told me he was on the way home but came back searching for me after he saw a bag at the passenger seat.

"He said he immediately opened the bag hoping to have my particulars so that he can retuern it to me.

"He then said he was shocked when he saw the whole bag of cash. His first thought was 'oh dear this man will surely go mad if he lose this bag. It may even cost him his life'.

"He immediately rushed to MBS hoping to get the hotel staff to contact me.

"I am sincerely grateful and other than being thankful I don't know what to say to this kind soul.

"So, I hope I can make everyone know and can learn from this driver's kind deeds.

"There are still kind souls in this world.

"I am sure this driver will surely make a comeback after he earns money and repays all his debt. His heart is righteous.

"Sorry if my English isn't so good, you guys may help me rephrase the story. Thanks.