Singapore guy saves 6,000 $1 coins in 2 years and gets 3 marriage proposals on Facebook for it 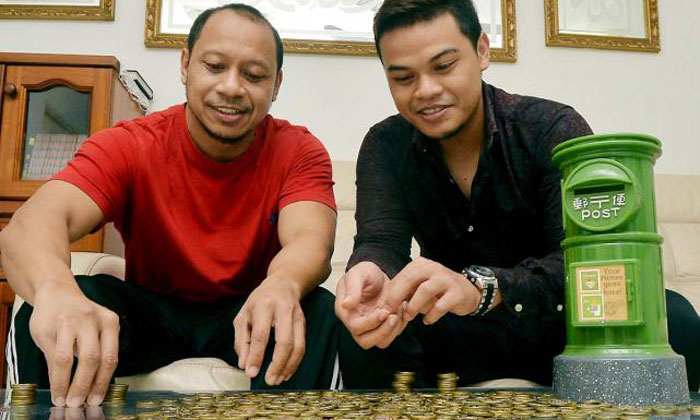 This bachelor's unusual method of saving money not only netted him $6,000, but also three marriage proposals.

But what caught most people's attention, after his story appeared in Malay daily Berita Harian, was him saying that though he has no girlfriend, he plans to use the money as part of his future wedding expenses.

When he first posted the article on his Facebook page, it got more than 1,000 likes and shares, more than 200 comments - and three marriage proposals.

Mr Helmy, an engineering associate, told The New Paper: "Two to three people from Malaysia messaged me, asking to marry them after seeing my post online.

"When I first read the messages, I thought people would really do anything for money."

But he does not take the messages seriously and has politely rejected the women.

Mr Helmy started saving $1 coins in mid 2014, after he was inspired by his uncle, Mr Anuar Ahmad.

He told TNP: "It helped me when I wanted to get married, so I thought it would help him, too.

"I am glad he took my words seriously and that he is even more diligent than I was."

Mr Anuar, a senior technician,stopped saving $1 coins after he got married 10 years ago, but he was glad to see his nephew determined to continue.

He said: "He has always been like that - when he sets his mind on doing something, he is determined to go all the way."

Mr Helmy said it is a smart way to save.

"You don't feel the pinch when you save small change," he added.

"When you have to put aside $10 or $20 every day or a few hundred dollars every month, you'll naturally feel the pinch."

Mr Helmy started by keeping all his change and would exchange 10-, 20- and 50-cent coins with stall vendors for $1 coins.

He found that when he inserted the change into vending machines, he would get $1 coins when he pressed the return change button.

"In the beginning, my mother told me this plan was nonsense," he said.

"She would not touch my coins and even laughed at me."

But she was the one who ended up helping him instead.

Mr Helmy recounted how his mother would hand him $1 coins in exchange for notes.

"She would keep her loose change for me," he said.

When he counted his savings last month, Mr Helmy could not believe how much he had saved.

He surprised even his brother, Mr Suffian Sarmadi Kamid, who began his own $1 coin collection six months back.

Mr Suffian, a 29-year-old security supervisor, said: "It's quite funny how my brother could save up $6,000 in his little, green piggybank."

Although Mr Helmy does not have a girlfriend, he is planning ahead for his big day.

He said: "With this sum of money, I am prepared to pay dowry and settle marriage costs.

"It tells my prospective mother-in-law that I'm prepared and I've got what it takes to marry her daughter."

Related Stories
Chinese woman gets down on one knee to propose to BF with Harley Davidson motorbike and property deed
Beautiful couple go on thrilling climb on Hunan mountain -- where guy does something even riskier
More About:
marriage
proposal