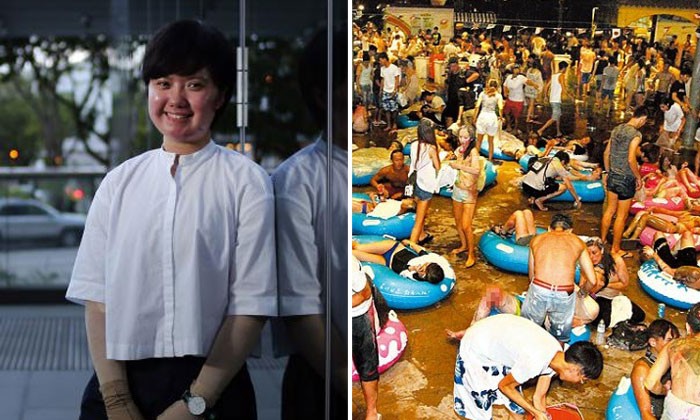 Megan Loy had first thought of studying medicine as a 16-year-old, but picked it only "by process of elimination" as she was strong in the sciences and wanted a profession that was not desk-bound.

But a brush with death and a four- month stay in hospital after she suffered severe burns in a water park blast in Taiwan last year has made her determined to be a doctor.

The good news for the 19-year- old was that she is one of 300 students admitted into the medical faculty at National University of Singapore (NUS) this year. She started her course last week.

Ms Loy, who achieved a high score of 42 out of 45 in the International Baccalaureate (IB) examinations, showed that she has the makings of a good doctor in her interviews and admission essay, said Professor Hooi Shing Chuan, vice-dean (Education) at NUS' Yong Loo Lin School of Medicine.

He said she had demonstrated maturity of thought and tremendous resilience after suffering serious burns on up to 80 per cent of her body when a blaze broke out at the Colour Play Asia festival in Taipei in June last year.

What also came through was her strong wish to help people through medical training, he added.

"It was evident to the panel that this was a candidate who had the makings of a truly compassionate doctor; someone who would intuitively understand and respond empathetically to pain and suffering," he said.

Ms Loy said her brush with death and subsequent treatment at the Burns Centre in Singapore General Hospital had crystallised her ambition to become a doctor.

After nine skin grafts, she is now free of burn wounds but still has some scars and tender spots on her skin and has to wear a pressure garment to protect it.

Ms Loy, who did her IB studies at Haileybury and Imperial Service College in England, said she had previously done volunteer work in hospitals, including a stint assisting doctors to deliver babies in Tanzania.

But it was her four-month stay at SGH that gave her the chance to experience the transformation, both physical and psychological, that doctors can bring about in their patients.

"Throughout my hospital stay, I met some of the most knowledgeable and dedicated doctors. What struck me was their commitment and enthusiasm for their vocation.

"As a patient, I experienced bouts of helplessness, frustration and anxiety. But I also felt the hope and comfort that doctors can bring."

Ms Loy said she faces a "long and arduous journey" to become a doctor, but feels that the "gruelling hours" will be worth it.

"There is no greater joy than witnessing the positive change one can make in the lives of others," she said, adding that she is leaning towards specialising in burns treatment or reconstructive plastic surgery after completing medical school.

Meanwhile, NUS said it has admitted more polytechnic graduates and students from a wider range of junior colleges into its medical faculty in recent years.

Now, one in four are from institutions such as Serangoon and Meridian junior colleges.

The faculty draws more than 2,000 applicants a year.

Most have a string of As or, in the case of polytechnic graduates, near-perfect or perfect grade point averages of 4.