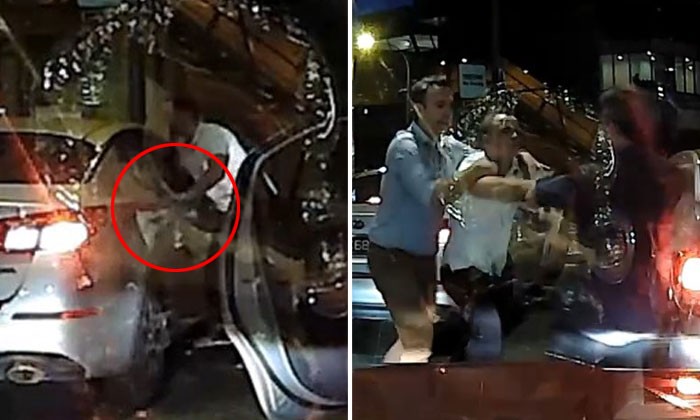 A video circulating online shows a man assaulting a taxi driver who honked at him at a pick-up point of a building and later pushing a driver for confronting him.

According to netizen Jackson Tay who recorded and uploaded the video, the incident took place at One Raffles Quay on Feb 10 at around 7.40pm.

At the beginning of the video, a taxi can be seen and heard honking at a car and that looked to be blocking the exit of the pick up point and its passenger who was boarding the vehicle.

The passenger, a Caucasian man in a white polo T-shirt, then knocked on the window of the cabby who was trying to squeeze the taxi past the stationary car.

He then started taunting the cabby. A few moments later, the Caucasian man went up to the taxi and started hitting the cabby several times through the cabby's open car window.

Jackson then alighted from his vehicle and confronted the assailant.

Instead of backing down however, the latter pushed him to the ground.

The cabby who was assaulted earlier also alighted thereafter and to confront his attacker.

The Caucasian man fought back, but was later restrained by a companion.

Security staff arrived at the scene towards the end of the video.

Said the netizen who uploaded the video:

"The man did not look to be drunk. I did not smell alcohol on him.

"I intervened because I did not like the sight of seeing anther driver getting bullied.

"The assailant left with two companions after that.

"I am not sure if the cabby made a Police report."