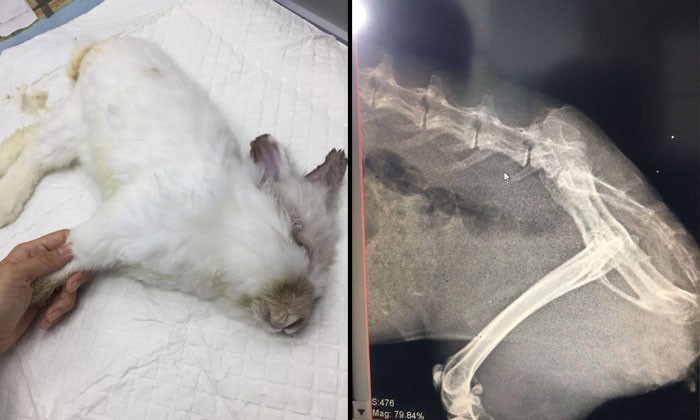 Stomper Xinlin, a representative of rabbit rescue group Bunny Wonderland, alerted Stomp to a rabbit named Apollo that died after it was allegedly abused.

The Stomper informed us that she has written the backstory of the Apollo's death in a post on Facebook.

"On October 24, a rabbit owner wrote to us to seek our help to take in her 3 rabbits. She is a young student who had been living in Singapore with an uncle.

"She adopted the rabbits and brought them home without her uncle’s consent. Since then, their relationship turned sour.

"Due to limited housing space, the rabbits were often jailbreaking and on a few occasions, the rabbits escaped into the uncle’s room.He would locked them in the toilet with no food and water."

"One day, the rabbits escaped again and this time, the young lady found the rabbits hurt. The uncle confessed to her that he had been hitting the rabbits with a wooden rod.

"HRSS, SPCA and AVA are involved in this case and with their help, all 3 rabbits were rescued.

"However, we soon realised one of the rabbits, Apollo, was in appalling condition.

"Three of his legs were broken and he could not move his lower half at all. We took over his care and brought him to The Animal Doctors (TAD).

"Unfortunately, what we uncovered was much more devastating. His lower spine was fractured and almost all his ribs were broken.

"The old injuries may have healed but the long term abuse had put a strain on Apollo. He lost all senses to his limbs, he could not defecate on his own, and no medication in his world could heal him.

"We even brought Apollo to see Dr Landon, our top surgical specialist, but his injuries were so severe that there was no solution. We were helpless. Apollo was hospitalised at TAD for the next few days and cared for by their dedicated medical team.

"They could tell that despite the paralysis, Apollo was lively and had a will to live. Soon, we discharged him and brought him back to Bunny Wonderland. He was put on long-term pain relief and we had to express his bladders every few hours.

"He could not control his bowel and need daily rinsing of his bottoms. All we could do is to keep him comfortable and buy him some time to enjoy some peace.

"Apollo seemed to know and was very cooperative. Despite all the challenges he had, Apollo would greet our volunteers when they visit.

"We could see he thoroughly enjoyed the attention, especially the headrubs and nose kisses.

"On the morning of November 21, Apollo collapsed.

"He was rushed to TAD and placed on oxygen support. He showed signs of neurological disorder and his condition was critical.

"He was stabilized for a few hours but unfortunately, his body was too weak. He passed away. He was only 3 years old."

A spokesperson from AVA has confirmed that they are investigating the case of alleged animal cruelty.