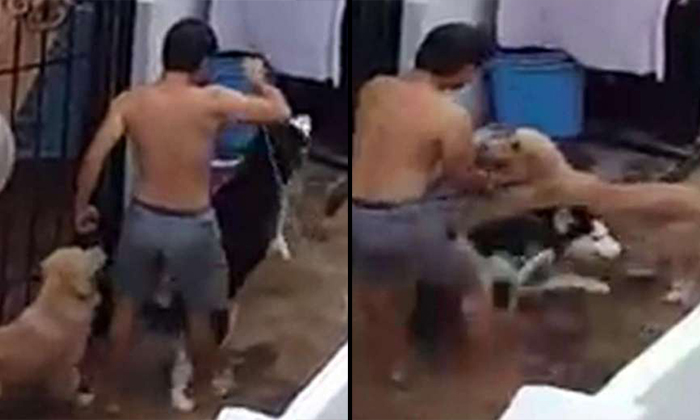 Alan Chiam Choon San, 41 was charged with ill-treating an animal on Wednesday (Nov 23) after he was filmed kicking and punching his Siberian Husky in May.

He kicked the dog's body thrice, punched its head and lifted it into the air by its collar on May 23 at aroun 7am.

The incident occured at Loyang Green at Jalan Loyang Besar in Pasir Ris.

The video of him abusing his dogs went viral that morning and Chiam later apologised for his "seemingly harsh actions". He explained that he was trying to break up a fight between the dogs.

Chiam also faces one count of keeping 22 dogs at a place which is not a dog farm. He did not have the permission of the Agri-Food and Veterinary Authority (AVA).

According to The Straits Times, Chiam told the court he intends to plead guilty and wants to engage a lawyer to help lessen his sentence.

AVA said: "While we investigated the case, the dog was surrendered to AVA and sent to a vet clinic for medical examination. The dog is currently under the care of the Society for the Prevention of Cruelty to Animals (SPCA)."

Related Stories
5 cats dead after 39 of them found in poor condition at Yishun home, female owner jailed
11 Bishan stray cats go missing, believed to have been caught by van driver in his 20s
Do you know this uncle? SPCA is looking for him in relation to alleged monkey abuse at Woodlands Waterfront Park
Is someone poisoning cats? Cat carcass seen floating along Telok Kurau Lorong N Park canal
animal abuse
husky
dog
cruel