Photos and video: Body of man 'with no eyes' found in water at Changi Beach 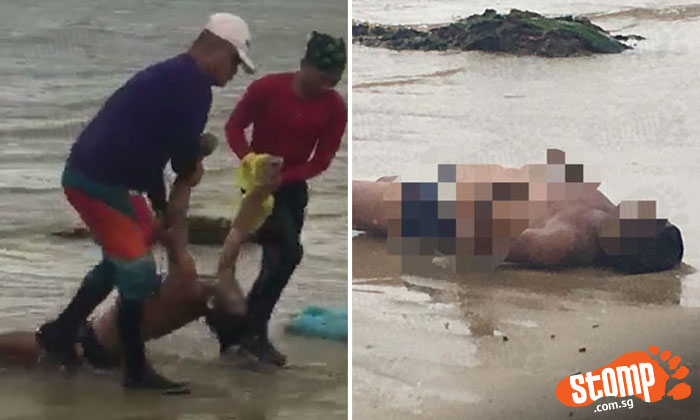 Beachgoers at Changi Beach were in for a shock when a body was fished out of the water at 6pm today (Jan 28).

Stomper Indra alerted Stomp to the incident stating that the body was found near Changi Beach Carpark 6.

He recounted that two men had approached him earlier to ask if he had seen something floating in the water that looked like a human arm.

Indra said that he saw something but could not make out what it was.

The two men then went into the water with a group of anglers to check and found the body.

Indra shared a video of the men pulling the body out of the water.

"I was about 10 metres away from the body when the men pulled the body out and did not dare to look too closely.

"But from where I was, it looked like the man was missing his eyes.

"I saw something like white patches where his eyes should have been.

"Apart from that, the body did not look like it was decomposing so I think that the death may have been quite recent."

Indra then left the beach at around 6.30pm and informed Stomp that the police had been called by then.

Police have confirmed receiving call from a member of the public at 6pm alerting them to the body.

Facebook user, Syafiqah Daud also posted a video of the scene at 6.48pm.

Police officers had arrived at the beach and a crowd had gathered around the body that had by then, been covered.

Stomper Riduwan also shared another video of the incident with Stomp.