Mee rebus fan throws up after seeing fat, juicy worm in his meal from Compass One food court 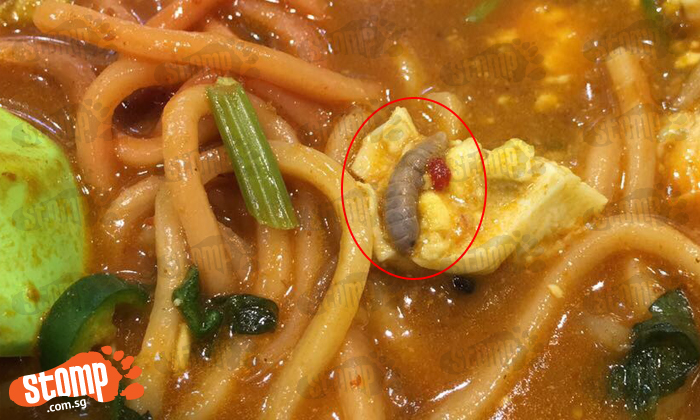 Stomper Chee was enjoying his meal immensely at Compass One's food court on Mar 1, at around 1pm and even told himself '#meerebusforlife'.

However, that all changed when he spotted a fat worm in his noodles which made him throw up in his mouth.

"Was at Compass One's Kopitiam at Sengkang on Wednesday for lunch.

"Decided to go for the promotion that the Nasi Padang stall had, which was $3 for mee rebus, mee siam, lontong and mee soto.

"I resulted in having mee rebus. It was so tasty, and I even told myself #meerebusforlife.

"I ate half of it and saw this big, fat and juicy worm somewhere in between the egg.

"I immediately threw up in my mouth and complained to the stall.

"They offered me another free meal which I obviously didn't want.

"What do you expect, I threw up in my mouth.

"NO MORE CHEAP FOOD FOR ME IN RETURN FOR A FAT JUICY WORM. #goodbyemeerebus"