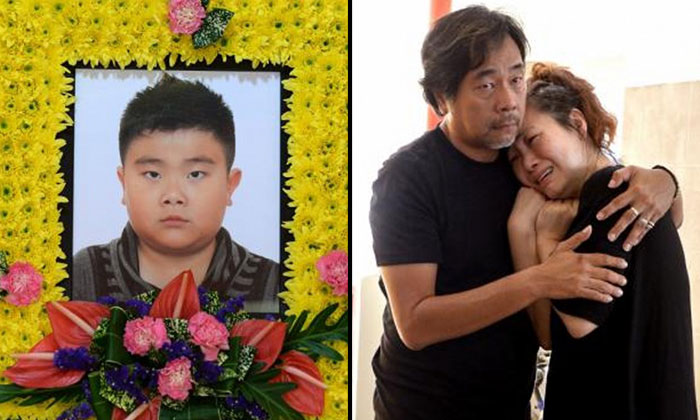 He was a generous boy who loved to help others in need.

Zenneth Hue Yee Hon, 11, was also mature for his age and liked mingling with the elderly.

The Primary 5 pupil at Maris Stella High School died suddenly on Tuesday after he was found unconscious in the school bus.

He had been unwell over the weekend and did not attend school on Monday, but the cause of death is still unknown.

Yesterday, his mother Jennifer Lim recalled that about a week ago, Zenneth had repeatedly reminded her to be a good daughter to her mother.

She told The New Paper: "After I had a minor disagreement with my mother, he told me, 'Please be more filial to grandma, don't argue with her, take good care of her'."

While the boy had often shown empathy for the elderly, Madam Lim still found his words odd. "He had never said such things before," she said.

Heaving a sigh, a teary-eyed Madam Lim, who is in her 40s, then added: "I think I know why he kept reminding me to be more filial to my mother. Maybe he knew he would be leaving us soon."

Madam Lim, who works in the health industry, said Zenneth, an only child, started feeling unwell in school on Friday morning.

The school called her and Madam Lim told Zenneth to phone her brother, who then picked up his nephew and took him back to his Woodleigh condominium home.

Later that day, Madam Lim took her son to a clinic and found that he had a high fever. His body temperature was 41 deg C.

He was given medication and spent Saturday resting at home.

As he was still feverish on Sunday, his father decided to take him to another doctor at a different clinic.

Zenneth felt much better after taking the medicine given by the second doctor, and his body temperature returned to normal.

He did not go to school on Monday, and was in the school bus on the way to school the next morning when he lost consciousness.

TRIED TO WAKE UP

The bus driver thought the boy was asleep and tried to wake him up. When Zenneth did not respond, the Singapore Civil Defence Force was notified at around 6.55am.

An ambulance took him to KK Women's and Children's Hospital (KKH), where he was pronounced dead about two hours later.

Correcting TNP's report yesterday that said she and her husband were overseas at the time, Madam Lim said she was at home getting ready for work when she received a phone call about Zenneth.

"I immediately rushed down to the hospital. I was shocked. Zenneth was healthy and had no pre-existing health problems," she said.

Her mother, who wanted to be known only as Madam Swee, 64, told TNP she was at work at a Serangoon Gardens coffee shop when Zenneth's godfather rushed in to tell her that the boy was in KKH.

Madam Swee, who also has a 10-year-old granddaughter, took a taxi there only to find out that Zenneth had died.

With tears welling in her eyes, she said in Mandarin: "My daughter was so consumed by grief that she could barely stand up.

"Nurses shook their heads sadly when they saw me, and said the medical team had tried their best, but failed to save my grandson."

When TNP visted Zenneth's wake at the void deck of Block 411, Serangoon Central, yesterday afternoon, his loved ones had gathered to await the arrival of his body.

When the body arrived at around 3pm, they burst into tears while standing near his casket.

"Whenever he saw old people selling tissue paper, he would insist on buying some just to help them," she said.

"And every Mother's Day, he would give cards and gifts to both his mother and me."

Zenneth's maternal uncle, who lives with Zenneth's family, said he will miss his nephew.

The driver in his 40s, who wanted to be known only as Mr Lim, said: "Similarly, on Father's Day, he would make cards for both his father and me. He was a very generous boy."

Zenneth will be cremated today.