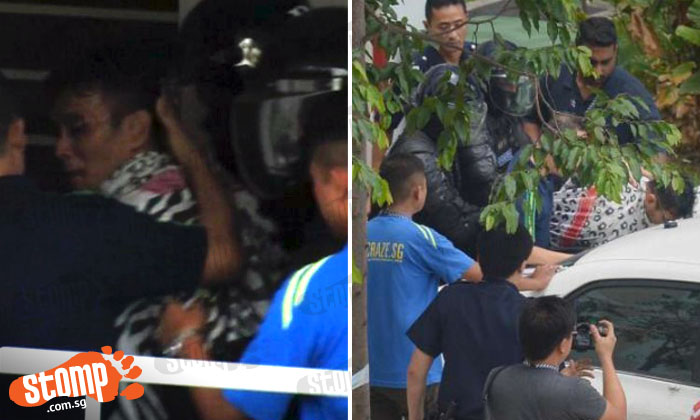 A man who allegedly held a two-year-old boy hostage in a Sembawang flat in a dramatic 17 hour-stand-off with police was on Friday (Sep 30) hauled to court.

According to The Straits Times, Muhammad Iskandah Suhaimi was charged with having a knuckle duster without permission. Knuckle dusters are also known as brass knuckles.

The Stomp Team was on scene on Sep 28 when the 39-year-old had locked himself in with his friend's son, 2, for more than 17 hours at the fifth floor flat at Block 462, Sembawang Drive.

The Police said on their Facebook page that the incident took place after the man had a dispute with the two-year-old boy's mother. He is reportedly a friend of hers.

Officers from Ang Mo Kio Division, the Crisis Negotiation Unit and the Special Operations Command had been in a standoff that lasted 17 hours with the man.

The boy was eventually rescued by officers who broke into the rental flat. They had climbed through a window, which was the fastest way in.

A video filmed by Stomp journalists at the scene show the officers in action and breaking into the fifth-storey flat.

The two-year-old boy was unharmed throughout the entire operation.

Suhaimi was then arrested for wrongful confinement and suspected drug-related offences.

District Judge Christopher Goh granted the police prosecutor's request for Iskandah to be remanded for psychiatric evaluation, even as police investigations regarding his involvement in other possible crimes are still ongoing.

The case will be mentioned again on Oct 14.

His mother, who seemed to have fought with Iskandah before the stand-off began, has also been arrested for suspected drug offences.

Under the Corrosive and Explosive Substances and Offensive Weapons Act, all kinds of knuckle dusters are considered weapons.

The boy is now in the custody of  Ministry of Social and Family Development (MSF).