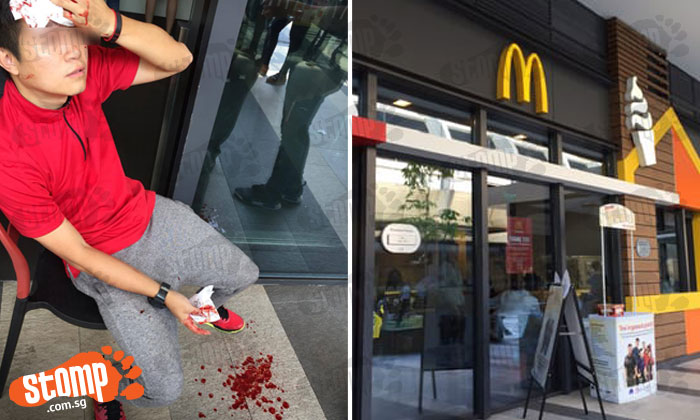 How would you feel if someone just spat at you and later punched you for absolutely no reason at all?

Stomper Vince and his girlfriend were waiting for their lunch order at Paya Lebar Square's Mcdonald's at around 1pm on Sunday (Nov 20) afternoon when the incident took place.

"A stranger who seemed to be in his early to mid 20s came to my side and spit on me for no reason.

"Annoyed, I turned around and shouted 'What do you want?' at him.

"As there were a lot of people looking our way at the fast food joint, I did not want to make a scene and decided to talk to him outside."

Upon stepping out of Mcdonald's, the man instructed Vince to go to a far corner to 'talk' but Vince insisted that  'if you want to talk, we talk here, it's noe necessary to go too far'.

"All of a sudden, he got aggressive and was about to hit me.

"In response, I asked him 'Who are you? Do I know you?' But he continued his monkey business anyways, threatening to hit me.

"At this point, my girlfriend came out to the entrance, trying to pull me in and said, 'Forget it, let's not cause any trouble, our food is coming, we'll just grab and go.'

"Out of the blue, this guy for no reason again spat at my girlfriend's face. And everyone at the entrance witnessed this.

"I got so angry I told my girlfriend to stay inside Mcdonald's, and later turned to the guy and said, 'You don't move, I'm going to call the police.'

"And just as i fished out my phone and looked at it, I felt a heavy punch on my head and closed my eye for a second.

'When I opened my eyes, he was already running away.

"I wanted to chase after him, but that's when I noticed blood dripping down from my head non-stop.

"I was shocked, and so was everyone else who witnessed this.

"Aunties were shouting to call the ambulance, and passers-by and the McDonalds' staff rushed to pass me napkins and a chair to rest on."

Vince believes that the guy had used something sharp to his him as a mere punch on the forehead would not have caused a deep cut.

"When the ambulance and police arrived, I was conveyed to the hospital for five stitches.

"That night, the police called to inform me that the CCTVs in McDonalds' did not point in the direction of the incident, so none of it was caught on camera.

Vince is currently appealing for witnesses of the incident so if you have taken any photos / videos please email them to stomp@stomp.com.sg or WhatsApp us at 9834 3761.