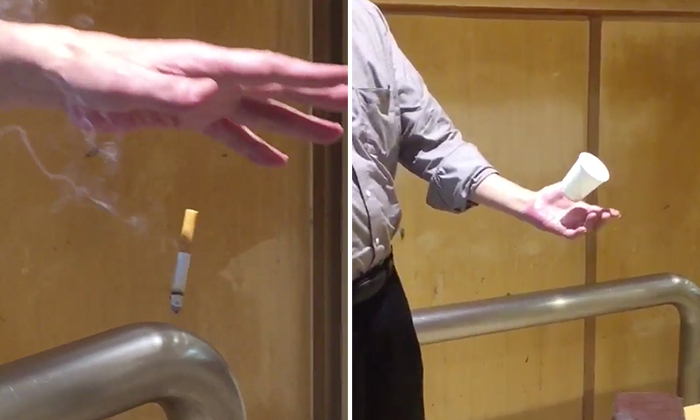 22-year-old Isamu Felipe Nagano was in the smoking area of a shopping mall when he was treated to a repertoire of tricks performed by an anonymous middle-aged man.

He then filmed the performance and uploaded them onto Twitter.

The video has since been retweeted close to 60,000 times.

In one of the videos, the man levitated his paper cup, and upon request by Nagano for an encore, he did it again, this time with his cigarette butt, still lit, according to Distractify.

“When he was done with his magic tricks, he gave us a smug face.

“He started smoking looking very satisfied, with a full smile on his face.”

Check out the video below.

Related Stories
Every day he's shufflin': This dude will charm you with his insane card tricks
Stomp Team blown away by 'karaoke girl' with beautiful voice -- and only realises her true identity later
This 4-year-old can speak 7 languages, and she's now an Internet sensation
magic
talent
creative
mind blown
Magic performed by man in smoking room