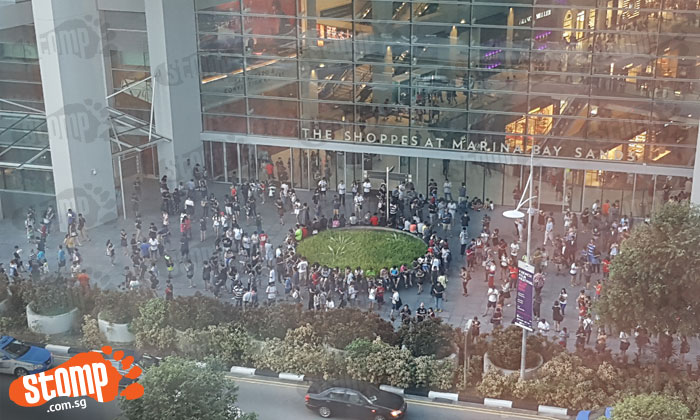 Stomper Richie was amazed at the number of people who are still dedicated to the phenomenon that is Pokemon GO.

He spotted a crowd of 'trainers' gathered at a Pokemon hot spot in front of The Shoppes at Marina Bay Sands (MBS) yesterday (Oct 29).

"I am amazed that people are still crazy about Pokemon GO.

"I saw a huge crowd at MBS with people walking around with their phones in their hands till about 2am."

The huge gathering of Pokemon Go players might be attributed to the appearance of the rare virtual creature Snorlax.

Some caught it outside while others got theirs indoors.

Congratulations to all who managed to get their hands on the elusive Snorlax. Next time when there's a similar sighting remember to 'jio' us and share your experiences with us.

Pokemon GO is going big this Halloween, with treats like extra candies and increased chances of finding ghost-type Pokemon for all players starting today (Oct 26) and running through Tuesday (Nov 1).

To roll with the whole Halloween spirit, there are also increased chances of finding Drowzee, Gastly, Gengar, Golbat, Haunter, Hypno and Zubat.

Stomp Team went on a search for these ghost-type Pokemon, caught a few and captured the short but fruitful hunt in a video below.