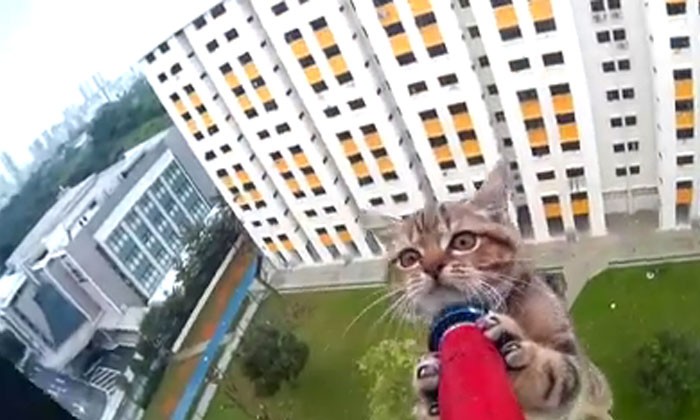 An adorable kitty stranded on a ledge plus a dramatic rescue captured on video equals a viral clip.

The animal welfare group posted a video of the rescue on their Facebook page on Tuesday, and the video promptly went viral, earning more than 2,300 shares.

The SPCA took advantage of the teaching moment to advise pet owners who live in high-rise apartments to secure doors and windows so as to prevent domestic animals from wandering onto ledges or falling from heights.

The dramatic, and rather dizzying, minute-long video shows an SPCA rescue officer leaning out of the window and using a leash affixed to a pole to grab hold of the trapped kitten.

Two police officers were also waiting on the ground with an open blanket, the SPCA added in its Facebook post.

It wrote in its caption: "Cats and kittens are curious animals and they risk falling out of an open window by simple acts such as chasing a bird that was flying past."

The SPCA said that it receives about two calls a week over such incidents.

"As most housing in Singapore are high rise apartments, cases of cats stuck on ledges are unfortunately quite common," said the SPCA's executive director, Dr Jaipal Singh Gill.