'He was a reliable son of Singapore': Stompers share their fondest memories of former president SR Nathan 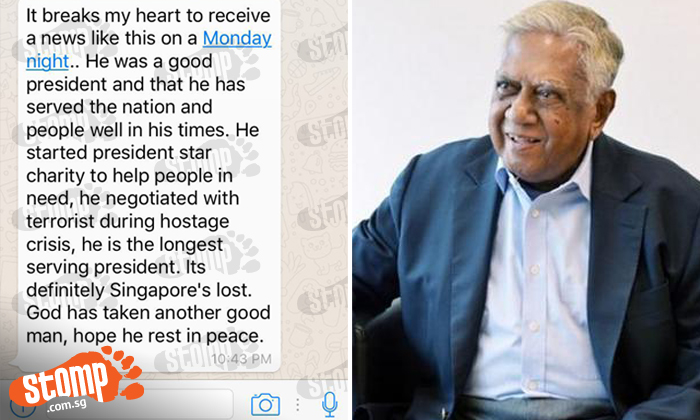 Stompers shared their heartfelt thoughts on the passing of former president S R Nathan, who died at Singapore General Hospital at the age of 92 on Aug 22.

Stompers Amos, Nicholas, Timothy, Kuek, Gary, Gary, Anthony, Ryan and Adam wrote in via WhatsApp to offer condolences and express gratitude for the longest-serving president's service to the country.

"It breaks my heart to receive a news like this," said Stomper Amos. He recalled the president's charitable work and his part in the Laju hijacking incident in 1974.

Stomper Nicholas also remembered the hard work Mr Nathan put in during his presidency 1999 to 2011, bringing Singapore through troubled times like the SARS outbreak in 2003 and global economic crisis in 2008.

It was earlier reported that he was in critical condition after suffering a stroke on July 31.

A State Funeral Service will take place from 4 pm on Aug 26 at the University Cultural Centre (NUS).

The body of the late Mr Nathan will lie in state at Parliament House from 10am on Aug 25 to 12pm on Aug 26.

Watch the tribute sent in by Stomper Ryan here: