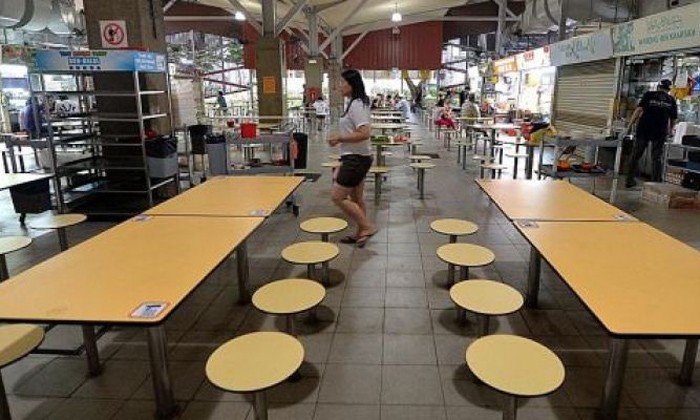 A tiny but potentially lethal insect has come between Singaporeans and their love of food, turning what used to be bustling food centres into almost "ghost towns".

The fear of contracting Zika, which, like dengue fever, is spread by the Aedes mosquito, is keeping the lunch crowd away from the Sims Drive and Aljunied Crescent area.

This is where most of the cases of Zika infection have been concentrated, with 26 more cases confirmed as of noon yesterday.

The tally now stands at 82 cases, and the spread of infection has widened to the Kallang Way and Paya Lebar Way area, with at least five cases there.

]No wonder Mr Ong Boon Seng, 46, gets nervous just thinking about it. In just two days, he has seen his business slump badly.

In his 14 years of running a provision shop at the Sims Vista Market and Food Centre, he has not seen such a drastic plunge in business.

"People are scared and don't want to come here any more. My business has been badly affected," he told The New Paper yesterday.

"It makes me sweat just thinking about it."

Pointing at the mosquito repellent patch on his shirt, he said that those working in the area were afraid, too.

"We are worried about business but also afraid of the mosquitoes," he said. "I hope they don't make us close shop because of this."

Mr Joe Tan, 62, a fruit seller at the centre, said the lunch crowd is now half of what it was less than a week ago.

"It is usually packed, with queues at the stalls on a normal day," he said.

"The stalls here sell food that is cheap and good, and they make very little profit. They depend on selling a lot to make enough money, but with half the crowd gone, it is going to be an uphill task."

NO CALL, NO QUEUE

A woman, who has been selling porridge and noodles for a decade at the centre, said she usually gets calls around lunchtime to place orders.

But in the past two days, she has not received a single call, and there has been no queue at her stall.

The woman, who declined to be named, added: "I don't know what exactly Zika is. I only know it is affecting my business badly."

A pregnant woman who was buying food at one of the stalls was not aware of the Zika infections in the area.

Declining to be identified, she said: "I am not sure about Zika, so I am not too worried about it."

Another customer, Mr Arumugam Palani, 46, a deliveryman from a warehouse nearby, said he had never seen the food centre so empty.

"I always come here for breakfast and lunch, and this is the first time I see the hawkers being able to sit down to drink coffee," he added.

There were similar scenes at almost every eatery in the Sims Drive area yesterday.

Even at the Geylang East Centre Market and Food Centre, which is located just outside the boundaries of the Zika cluster, stallholders bemoan that their business have dropped by 20 per cent.

Mr Alan Leow, 60, who runs Guan Kee Wanton Noodle, pointed at the many empty tables when asked if his business had been affected.

"It is definitely quieter than usual, but I am still making ends meet," he said.

Like many others, he is worried that the situation could get worse. "But what can we do?" he added.

At the coffee shop at Block 45, Sims Drive, a woman from the drinks stall said business was poor.

A beer promoter working there had been the first case of locally transmitted Zika infection.

The Straits Times reported yesterday that the sale of mosquito repellents and patches in five Guardian outlets in Aljunied had tripled from last week.

But Madam Catherine Ng, 51, who owns a sundry store at the Sims Vista Market and Food Centre, told TNP that she stopped selling repellent patches after her last batch expired earlier this year due to a lack of demand.

"I would have maybe three people coming to me every year asking for insect repellent," she said.

Then yesterday, she had to turn away five people trying to buy repellent from her.

While the stallholders are worried about their businesses and health, they are quietly hopeful that the preventive measures being taken by the authorities will be successful and will return confidence to the area.

Mr Leow said: "Just because this has happened, we cannot stop our business and stay at home. Life goes on."

Related Stories
47-year-old woman in Aljunied who contracted Zika has no history of travelling to Zika-affected countries
More About:
Zika
disease
MOH
mosquito