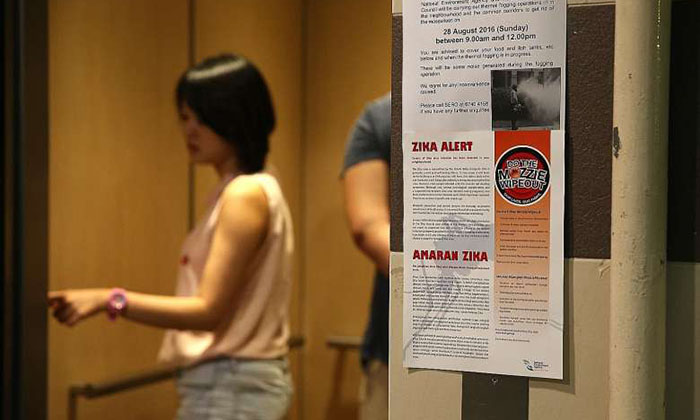 A 47-year-old woman has tested positive for the Zika virus, in the first locally transmitted case here.

This follows the first Zika case here in May involving a 48-year-old man who had visited Brazil, one of the Zika-affected countries.

The second patient, a Malaysian who lives in Aljunied Crescent, has had no travel history to Zika-affected countries.

"She was likely to have been infected in Singapore," said a joint press statement yesterday from the Ministry of Health (MOH) and National Environment Agency (NEA).

Three other people may be down with the virus. Two live near the woman's workplace, with one working nearby. Their preliminary tests were positive, but the authorities are waiting for final confirmation.

As the Zika virus is spread by the Aedes mosquito, which also spreads dengue, the authorities expect more locally spread cases.

While Zika infection is mild for most, it can have fatal effects on unborn children. Pregnant women who get infected could give birth to babies with small heads, or microcephaly, and other brain defects.

The first locally infected victim lives at Block 102, Aljunied Crescent, and works in the vicinity.

She started to have a rash, fever and conjunctivitis on Thursday and saw a doctor on Friday before being sent to the Communicable Diseases Centre at Tan Tock Seng Hospital.

She tested positive for the Zika virus yesterday. She is well and recovering, but is still under observation there, the authorities said.

Ms Tin Pei Ling, MP for MacPherson SMC which covers Aljunied Crescent, said the other three who might be infected are not in her constituency. Still, her grassroots leaders went door to door yesterday to give out insect repellent, and urge people to keep their premises larva-free.

The MOH-NEA statement said: "With the presence of Zika in our region and the volume of travel by Singaporeans as well as tourists, it is inevitable that there will be imported cases of Zika into Singapore.

"There is also risk of subsequent local transmission, as the Aedes mosquito vector is present here."

Health Minister Gan Kim Yong said MOH and NEA are working together to carry out vector control and testing of residents in that area who have fever and rashes, so as to reduce the risk of further spread.

He urged those who have these symptoms to see a doctor.

The MOH has also alerted all general practitioners in the area to be extra vigilant and to immediately report patients suspected to have the virus to the ministry.

All those suspected to have the Zika virus will be isolated till they are proven to not have the virus.

NEA yesterday stepped up misting and fogging in the Aljunied area to kill adult mosquitoes.

Its officers are inspecting premises for larvae and may need to gain entry into inaccessible premises by force after serving notices, it said.

He said: "The onus is on every citizen to kill the mosquitoes and in turn kill the virus."