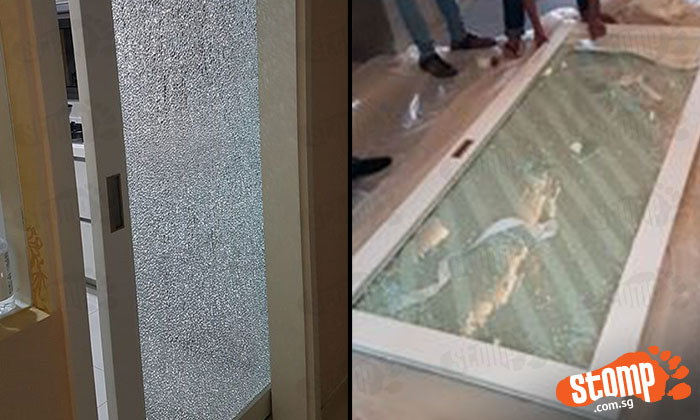 Stomper Hock Herng was left bewildered when the glass panel on a sliding door in his condominium unit at Sky Habitat in Bishan suddenly shattered with a loud sound on Feb 1, at around 9pm.

According to Hock Herng, there was no one even remotely near the glass at the time, and the glass was perfectly fine until the moment when it suddenly shattered on its own.

He subsequently wrote in to the developer of the condominium regarding the incident, and workers from the contractors company were dispatched to check on the door the next day (Feb 2).

Said Hock Herng: "They simply came to inspect and left, without reaching a conclusion."

When Hock Herng called the contractor to ask about the inquiry outcome a few hours later,  he was told that although they could not determine the cause of the shatter, they were positive that it was not due to a defect in the product.

"What’s ironic was that even though the workers on site had warned me about the safety hazard of the shattered panel, they said that there was nothing they could do about it and told me that I had to find my own contractor to sort the problem out myself.

"It was during the Chinese New Year period so it was difficult getting anyone else to come and remove the door," recounted Hock Herng.

Determined to get to the bottom of this, Hock Herng wrote in again to the developer which finally agreed to have workers from the contractor remove the shattered panel two days later, on Feb 5.

Moments after workers removed the panel,  the glass panel collapsed.

"Two workers were even cut by the shattered glass.

"This shows how dangerous the situation was, and I wonder how it would have turned out if I didn’t remove the panel?”

The following week, after that, Hock Herng called up the supplier of the door to ask about what could have gone wrong.

He was however, told by staff that such an occurrence was natural and the company was not liable since the one year warranty for the glass had ended.

Said the homeowner in disbelief: "Really?!

"I grew up in an era where there were glass objects and furniture around my house but never once did such a thing happen.

"Do you mean to tell me that our glass panels can spontaneously crack without any warning just because ‘the warranty period’ is over?"

Hock Herng spoke to the developer again after the incident and was told that they would get back to him after consulting the site architect and supplier.

However, it has been a week thus far, and still he has not gotten a reply.

Hock Herng also posted his story up on the Sky Habitat resident FB page to share his concerns and experience with the other residents.