Fire breaks out at high-rise building in Farrer Park 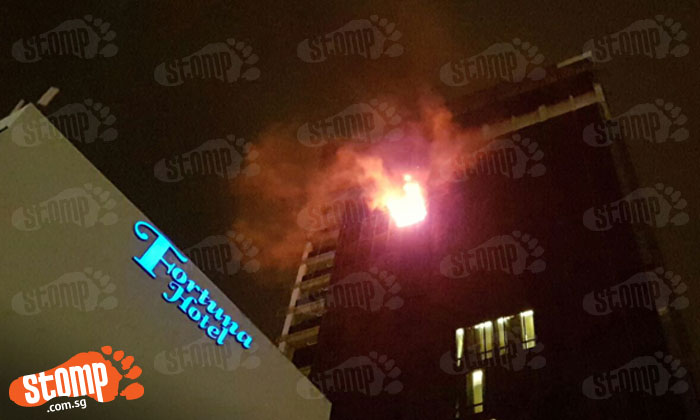 A fire broke out on the 17th floor of a building under construction above Farrer Park MRT station yesterday (Dec 7) night.

According to The Straits Times, the building is believed to be the Park Hotel Farrer Park. It is currently not completed yet, and is slated to open in the first quarter of 2017.

Stomper Rajan M first noticed the fire at 7.15pm. He was at the MRT with his son when he noticed the workers from the building site all gathered around. Wanting to find out what the commotion was, he looked up, only to see that there was smoke pouring out from the window.

Not long after, the glass shattered from the building pressure inside, and there was a "flame inferno" visible from the ground.

Thankfully, as the 20 workers in the building self-evacuated before the arrival of the Singapore Civil Defense Force (SCDF), there are no reported casualties.

SCDF said the fire involved carpentry work inside the room. It was extinguished using a single water jet.

A spokesman from SCDF also said that it was alerted to the fire at 1 Farrer Park Station Road at around 7.29pm, and dispatched two fire engines, two red rhinos and six support vehicles to the scene.

Stomp understands that the cause of the fire is under investigation.