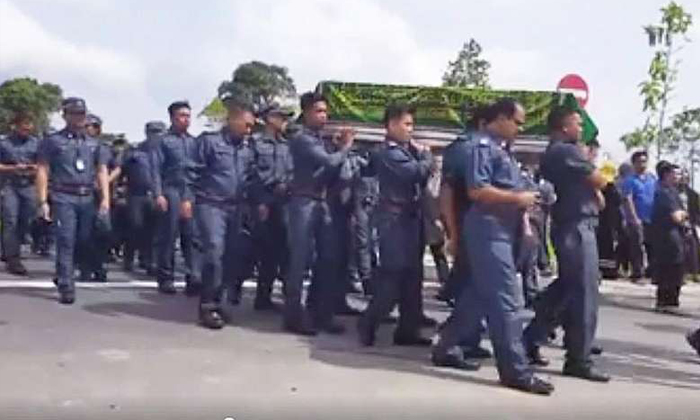 The auxiliary police officer who died in an accident at Tuas Checkpoint on Friday is believed to be the first Certis Cisco officer killed by a member of the public while on duty.

The Immigration and Checkpoints Authority (ICA) said there are safety measures in place for its officers, but declined to elaborate as the case is under police investigation. Both ICA and Certis Cisco said they will conduct a review on the incident.

Lance Corporal Norman Samri, 33, died after he was knocked down by a car at Tuas Checkpoint at 2.30am on Friday. He and two other auxiliary police officers had been diverting traffic from one of the departure viaduct's three lanes, where there had been a minor accident.

A Malaysian driver, believed to have been drink driving, suddenly swerved into another lane and ploughed into Lance Cpl Norman. The other two officers managed to jump out of harm's way.

Certis Cisco said the last officer who died in the line of duty was in 2012, in a freak accident.

The officer had fallen off his bike after avoiding a falling tree branch and was run over by a van driven by a colleague. Both of them were escorting a prime mover to the airport.

Lance Cpl Norman's family members told the Chinese evening papers that they will not be able to forgive the driver for his rash act and that they hope that the 28-year-old driver will get his due punishment.

Lance Cpl Norman, a bachelor, was the youngest of the family's seven children and he lived with his parents in a three-room flat in Yuan Ching Road.

According to his 70-year-old father, Lance Cpl Norman loved his job and often volunteered to work overtime. The young man wrote on his Facebook page last month that he was glad to be back at work. He had been absent for a week after getting injured in a bike accident on Christmas Eve. Each time before he left for work, he would grasp his parents' hands and tell them that he loved them.

Last December, a man in his 50s was killed at the Tuas Checkpoint after a crash involving a lorry and two motorcycles.