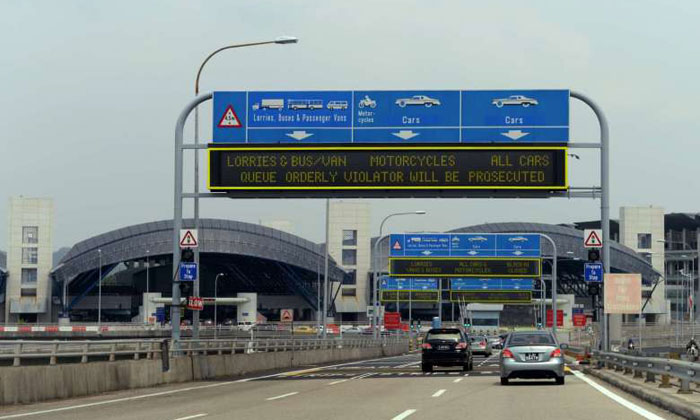 A 33-year-old on-duty Certis Cisco officer died on Friday morning (Feb 10) after he was knocked down by a car while trying to divert traffic at Tuas Checkpoint.

The accident happened at about 2.30am, and Lance Corporal (Auxiliary Police Force) Norman Samri was taken conscious to the National University Hospital where he died an hour later from his injuries.

A police spokesman said the 28-year-old male driver of the car was arrested for causing death by rash act and investigations are ongoing.

The Malaysian driver, who is believed to have been drink-driving, was arrested on the spot.

The Straits Times understands that when the accident happened, LCP Norman and two other auxiliary police officers (APOs) had been diverting traffic from the first lane of the three-lane road of the departure viaduct as a minor accident had occurred there.

The car was believed to have been speeding and swerving between lanes and did not slow down when it approached the APOs.

ST understands the trio tried to jump out of the car's way, but LCP Norman was hit and landed a distance away.

He suffered head injuries and died later in hospital.

When contacted, an Immigration and Checkpoints Authority (ICA) spokesman said: "The ICA extends our deepest condolences to the family of the late officer and is working with Certis Cisco to provide necessary assistance to the family."

The ICA spokesman added that she was unable to comment further on details of the accident as police investigations are ongoing.

DAC Chua said: "Certis Cisco deeply regrets the passing of LCP (APF) Norman Samri. We will be providing assistance and support to the bereaved family. "We are working with ICA and SPF in their investigations into the incident."