Empty, expensive bungalows in Singapore abandoned for years has yet to find occupants 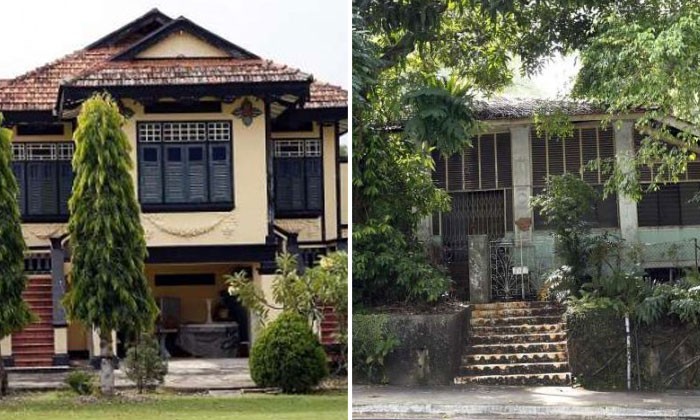 Last July, two stately bungalows which had fallen into disuse after housing the defunct Grand Hotel in Marine Parade for decades were converted into pre-schools following a $5 million makeover.

Earlier this month, The Sunday Times visited three abandoned abodes which have intrigued their neighbours, urban explorer groups, and heritage experts such as siblings Charles and Raymond Goh.

In Singapore, such "abandoned" properties are not tracked.

The Urban Redevelopment Authority (URA) tracks the vacancy rate for private homes that are completed, while the Ministry of Law's Public Trustee' s Office administers the estates of deceased persons. The Singapore Land Authority manages state land and state properties.

Even so, heritage experts believe that there are about 20 such old and unoccupied properties that dot land-scarce Singapore.

SLP International executive director Nicholas Mak said owners of such properties might hold on to them as they may not need the money and have no plans for the estate.

He said: "In land-scarce Singapore, the value of these properties will only increase, especially if they are freehold. Owners keep hold on them as a form of investment or for the next generation. These are usually their spare properties and not their main place of residence."

In other cases, the properties might be contested by descendants or part of court tussles and cannot be sold, he added.

Unoccupied for decades, a villa dating back to the 1920s has stood the test of time in the quiet neighbourhood of Bedok, near Upper East Coast Road.

Records show that it was owned by businessman "Abdul Hadjee Kahar Bin Abdul Ramee". According to heritage blog Remember Singapore, he had purchased land there from a Chinese nutmeg plantation owner for about $7,000 in 1910.

The house changed hands after the family was forced by the invading Japanese army to sell it. It was unoccupied for years and photographed in a state of disrepair in 2005.

The board described the architecture as a "fine example of a synthesis between traditional and imported styles" for it stands on stilts like kampung houses, but features neo-Rococo influences at the same time .

The Sunday Times understands that the building, currently registered to Livet Company, which is owned by the descendants of Dr Lee and Mr Teo, was recently spruced up and could soon be rented out to a ballet or pilates studio. The original interior, which had eight rooms, has been largely re-configured. When contacted, the Teos declined to comment.

A book by Professor Hadijah Rahmat, called Kilat Senja, notes that many operas and parties used to be held at the villa.

Dr Lee Nai Jia, head of South-east Asia research at Edmund Tie and Company, said the price for the site could be around $700 per sq ft given its development potential.

Prime districts are also home to such abandoned properties.

Take, for instance, 67 Cairnhill Road, tucked among soaring condominiums. The aged property is shrouded by tall trees, overgrown ferns and plant roots that creep across a boundary wall. The building itself appears to be a raised one-storey structure and wears a weathered coat of mint-green paint.

Steps leading up to the house are old and broken, and a string of colourful Christmas lights can be spotted on one side of the facade.

A resident in Cairnhill Mansions next door, who wanted to be known only as Ms M. J., 65, said she had always wondered who owned the house as she had never seen anyone going in. She said: "It's not nice to see such a building with rotten leaves lying all around in a prime area. It's quite unsightly."

Research by the Goh brothers, who brought the issue of abandoned property to the attention of The Sunday Times, found that it last belonged to Mr Lien Kwang Wah, who died in 2008. The Sunday Times understands that the property has been held in the family of the brother of tycoon Lien Ying Chow, the founder of Overseas Union Bank.

The home was purchased in 1912 by Boey Chuan Poh, the sole proprietor of the Union Times, a Singapore newspaper. Mr Boey also built a villa off Balestier Road that is known as the Sun Yat Sen Memorial Hall today. Mr Charles Goh said: "The house was known as Fernbank and it was re-numbered from 44 to 67 Cairnhill Road based on the 1930 map of Singapore."

Take the case of the 1938 Chee Guan Chiang bungalow at 25 Grange Road, which suffered from vandalism and poor maintenance for years. It was conserved by the URA in 2008. The building was designed by one of the leading architects of the Modern Movement in Singapore, Mr Ho Kwong Yew, who also designed the now demolished Haw Par Villa residence.

Another bungalow which bears some similarity to the Chee Guan Chiang house is the property at 9 Claymore Road, just behind Pacific Plaza in town. It is owned by Mr Tan Kheng Chuan, who reportedly owned Hiap Ann Sago Factory, which has since been deregistered.

The Goh brothers estimate that the building, which has curved walls and extensive windows, has been abandoned since the 1970s. A 2007 report pegged its value at $151.5 million.

Other intriguing homes, which have remained empty for years that were highlighted by heritage community members such as blogger Jerome Lim, include the abandoned premises of the former Pohsan Dance Studio at 263 Outram Road which dates back to 1937.

It used to be the workplace and living quarters of Mr Low Poh San and his wife, Ms Jenny Quek, who were Singapore professional ballroom dance champions in the 1940s and 1950s. It is now part of the conserved Tiong Bahru estate.