Roof of Sunset Way bungalow burns down after lightning strike 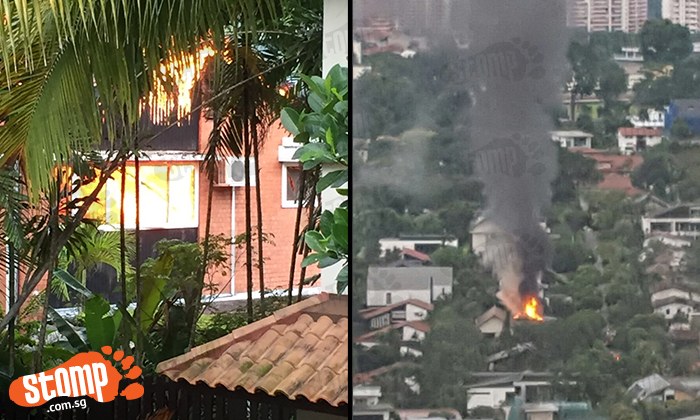 A house along Sunset Place was engulfed in flames yesterday (Nov 10) at around 5.30pm after a lightning strike.

Stomper Evon saw the smoke and flames from her flat some streets away, and Stomper NM was around the neighbourhood when the incident happened.

A neighbour told The Straits Times that she was in her house when she heard a "really loud clap" and saw a bolt of lightning hitting the ground.

She said: "The whole roof was gutted, completely charred."

Domestic helper Evelyn Altuna, 36, experienced an electricity cut at her house after the fire started. She lives in the neighbouring house.

"SCDF was alerted at about 5.30pm to a case of fire at a house along Sunset Place."

"Upon arrival, the fire had already engulfed the second storey of the two-storey house with flames leaping through the roof."

"No injuries were reported and the cause of fire is under investigation."