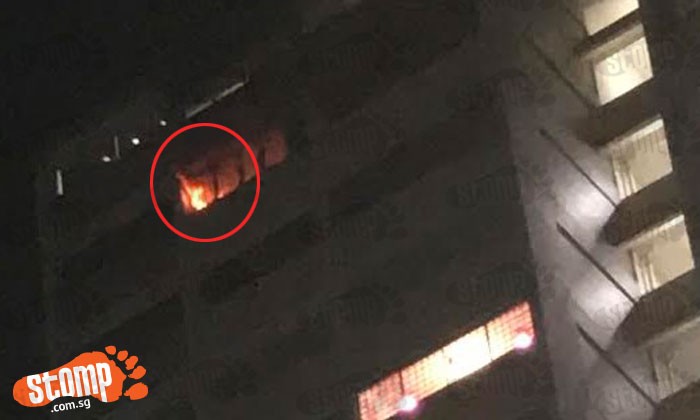 An elderly woman was sent to Changi General Hospital after a fire broke out at Block 55 New Upper Changi on the 24th floor at around 7.45pm yesterday (Dec 29) due to her burn injuries.

She was also found unconscious in her living room when firefighters arrived.

Stomper Winnie was visiting a relative at the area when she saw fire coming out of a flat unit at around 8pm.

According to her, the fire lasted for around 45 minutes.

She said, "Initially, glass could be heard shattering as the broken windows fall in bits and pieces.

"Many neighbours were shocked at the incident and children can be heard crying.

"Someone could be seen being rescued out of the unit."

Singapore Civil Defence Force (SCDF) has confirmed that they were alerted to the fire at 7.45pm and they dispatched two fire engines, one red rhino, two fire bikes, three ambulances and one support vehicle.

SCDF gained access into the unit and found an unconscious woman in the living room who was immediately evacuated by firefighters with paramedics standing by.

She regained her pulse after paramedics attended to her and performed cardiopulmonary resuscitation (CPR) on her.

She also suffered burn injuries on her arms and legs.

The fire involved contents of the bedroom and was extinguished with one water jet.

She was conveyed to CGH and 20 residents were evacuated from the building.

The cause of fire is under investigations.

Stomp understand that the elderly could be in her 70s.