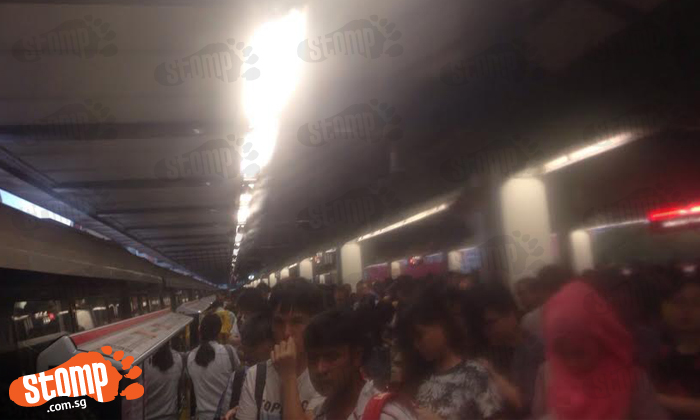 Commuters were stuck in a human jam around Singapore when train service on the North-South Line was disrupted and Circle Line was delayed today (Aug 30).

Stomper Gary sent in a photo of the situation at the red line to Stomp.

According to tweets from SMRT, there was no train service from Yew Tee to Bukit Gombak due to a track fault until 6.15am. Free bus service was available.

Subsequently, the fault was cleared but commuters were told to expect an additional 20 minutes of travel time between Woodlands and Jurong East.

A tweet at 9.36am indicated that train services had resumed as per normal.

The Straits Times reported that service on the Circle Line continued to be slow today (Aug 30), as the signalling fault that disrupted service on Monday (Aug 20) persists.

Commuters had complained of delays and stalled trains on the Circle Line during this morning.

SMRT announced that unspecified "intermittent signalling issues" were to blame.

SMRT has been carrying out tests and investigations ever since, said SMRT vice-president for corporate information and communications Patrick Nathan, but the issue has not yet been resolved.