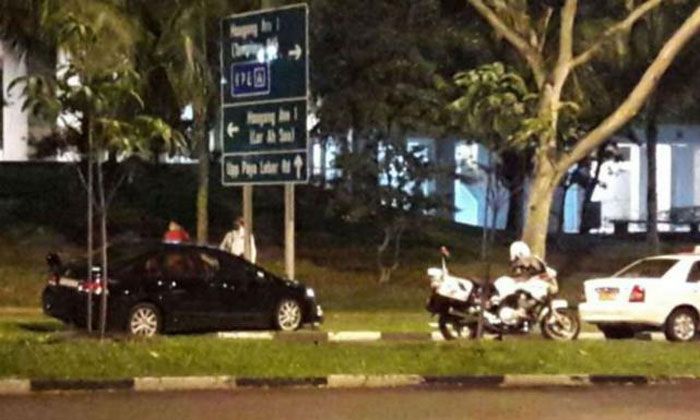 Two suspects fled on foot after the car they were driving got into an accident while fleeing the police on Thursday (Oct 20) morning.

The car tried to evade a road block that was set up along Xilin Avenue towards Simei Avenue, police said.

Pursued by police, the suspects drove their black car all the way to Hougang where it crashed into a road sign on Lorong Ah Soo at around 4am.

Police vehicles quickly caught up with the vehicle, and at least five were lined up on Lorong Ah Soo in a photo sent by a Lianhe Wanbao reader.

The two suspects reportedly escaped on foot. The reader said he saw police search the car and the surroundings with police dogs.

"Singapore is so small, where can they hide? They will be caught sooner or later," he told the Chinese evening daily.

There were multiple road blocks in the early hours of Thursday morning as the traffic police conducted an island-wide operation against drink driving.

A total of 77 drivers were stopped and tested for alcohol consumption at road blocks set up across Singapore.

Three women and 15 men, aged between 22 and 58, failed the test and were arrested for drink-driving.