Car 'bulldozes' into cyclist from behind, causing him to 'bounce' off bonnet and onto the road 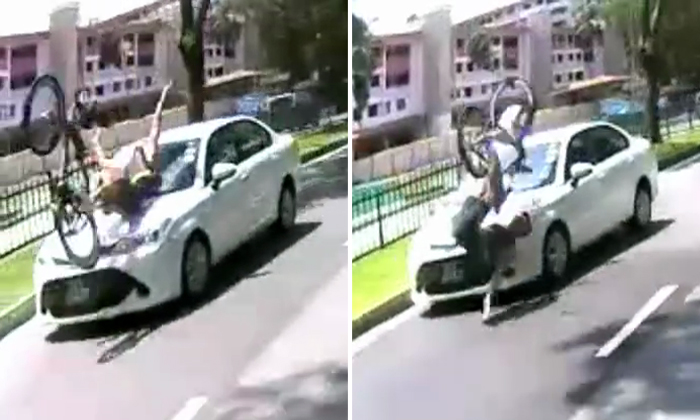 A car rammed into a cyclist from behind, sending the latter 'flying' off his bicycle.

The incident was caught on camera, though it is unclear when and where exactly the accident took place.

A video uploaded on the Beh Chia Lor Facebook page and credited to Desmond Goh shows how the car, which was travelling on the rightmost lane, collided with the cyclist.

The cyclist was knocked off his bicycle with great impact.

"Cyclists in the shadow of trees are most vulnerable especially when they are dominating the lane and not keeping to the side. Drivers are reminded to keep a lookout for vulnerable road users and exercise greater care," said the video caption.

Many netizens have responded to the video and faulted the cyclist for being inconsiderate by riding on the right lane.

One user wrote, "He learned a lesson the hard way."

However, others were much more sympathetic and said that people should not be too quick to judge.

Related Stories
Cyclist who thinks it's his papa's road nearly pays for it with his dear life
Driver nearly hits young boy who recklessly cycled across road at Yuan Ching junction
Look how close cyclist comes to being run over after beating red light
More About:
accident
cyclist
shocking