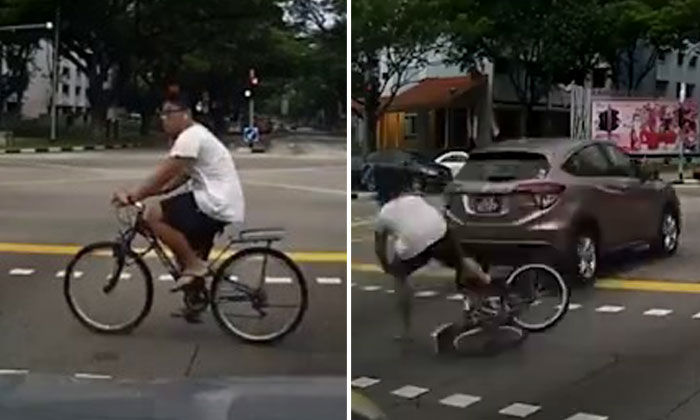 A video circulating on Facebook shows a reckless cyclist who almost got involved in a serious accident at the junction of Bedok North Road and Bedok North Avenue 3.

In the video posted on Road.sg, the cyclist clad in a white T-shirt can be first seen riding across the road in front of a vehicle. The traffic lights were not in his favour.

As he was riding across the road, he did not notice that a brown-coloured car was approaching the junction from his left side.

The car grazed the front of the bicycle and the cyclist fell onto the road. He got up shortly after and did not appear to be injured.

The driver of the car then stopped his or her vehicle after the junction, possibly to check on the fallen cyclist.

Read a caption accompanying the video:

"Idiot cyclist just doing the wrong thing and one more second he would have been seriously hurt or dead."