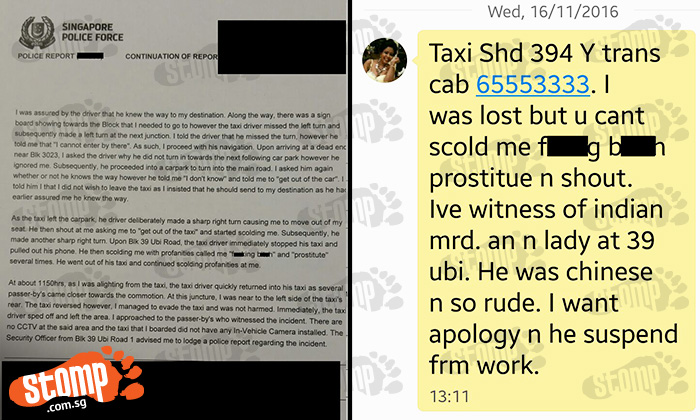 A woman lodged a police report after she was verbally assaulted by a Trans-Cab driver who called her a "f**king b***h" and "prostitute".

According to photos of the police report in the gallery above, the lady boarded a red coloured Trans-Cab SHD394Y along Ubi Road 1 on Nov 16, 11.30am.

Said the woman in the police report statement:

"I intended to go to Block 3014A Ubi Road 1, and I was assured by the driver that he knew the way to my destination.

"Along the way, there was a sign board showing towards my destination, but however, the driver missed it and subsequently made a left turn at the next junction.

"I told the driver that he missed the turn, and he told me that he 'could not enter by there'."

The taxi ended up at a dead end, and the woman then asked the driver why he did not turn in towards the next following car park.

The driver ignored her, and he drove into a car park to turn into a main road.

"I asked him again whether or not he knows the way, and he told me 'I don't know' and told me to 'get out of the car'," the woman added.

The woman then insisted to stay in the car as the driver had earlier assured her that he knew the way.

The driver eventually exited the car park, deliberately made a sharp turn and caused the woman to move out from her seat.

"The driver then shouted at me, told me to get out the car, and made another sharp right turn.

"Upon arriving at Block 39 Ubi Road at 11.50am, the driver stopped the car and took out his phone.

"He then called me a 'f**king b***h' and 'prostitute', got out of the car, and continued to hurl vulgarities at me."

Several passers-by came over to see what the commotion was about, and the taxi driver quickly got into the cab, reversed and drove off.

The woman has since lodged a police report.

Related Stories
Mum of special-needs boy called 'useless' by woman: "We should highlight those who are compassionate, not judge her"
Conversation between seller and buyer goes downhill fast on Carousell
taxi
taxi drivers
rude
vulgar