Mum of special-needs boy called 'useless' by woman: "We should highlight those who are compassionate, not judge her" 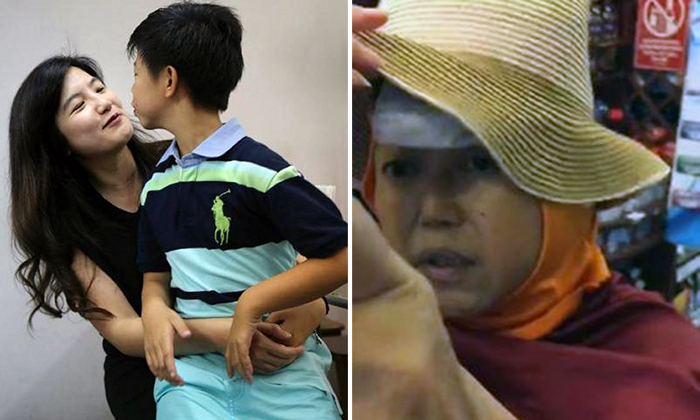 She is a regular at the 7-Eleven store in Killiney Road because her 10-year-old son, who has Williams syndrome, has been attending speech therapy lessons nearby for more than five years.

And the store employees are aware of the boy's special needs.

But on Tuesday, Madam Elaine Chan's encounter with a female customer who objected to her son's behaviour in the store turned nasty.

The 44-year-old, who works in a bank, said that despite her telling the woman that her son is a child with special needs, the woman verbally abused her, calling her useless for giving birth to him, and called him a b******.

Williams syndrome is a rare genetic disorder that causes learning disabilities and developmental delays in children.

Those with the syndrome, however, tend to be sociable, friendly and endearing.

The single mother told The New Paper: "My son loves fans and whenever he sees one, he wants to play with the buttons on it.

"The counter staff at 7-Eleven are very patient. They are fine with my son going into the room behind the counter to let him touch the buttons on the fan."

But at 8.45pm on Tuesday, the female customer told Madam Chan off for letting her son enter the room.

"I thought she was an off-duty employee, which would sort of give her the right to scold my son," said Madam Chan.

"I told her he's a special needs child and usually people would understand. But she replied, 'All the more you have to control your son.'"

When Madam Chan tried to explain about her son and his special needs, the woman raised her voice and became even more aggressive.

Madam Chan then realised the woman was not a 7-Eleven employee and decided to film her with her smartphone in the hope that it would make her leave.

But the woman continued scolding her and called her son a b******.

In the video, the woman, seen to be wearing a straw hat and covering her face with a piece of cloth, yelled at Madam Chan in Mandarin: "You are useless. Why must you give birth to a special needs child?"

She then hit Madam Chan's hand with her handbag, causing Madam Chan to drop her phone.

"My (11-year-old) daughter started crying because she thought the woman had hurt me, so I went to comfort her," said Madam Chan.

The loud noises also scared her son and he covered his ears with his hands.

After the woman left the store, a police officer walked in and Madam Chan told the officer about the incident.

The officer went to look for the woman, but was unable to find her.

Madam Chan subsequently shared her 37-second video of the incident on a WhatsApp group for parents whose children have Williams syndrome.

Her friend Janet Yeo, who was in the group, later posted the clip on Facebook.

Related Stories
Woman calls special needs boy a 'bas***d' and his mum 'useless for giving birth to him'
From argument to bromance: Drivers yell at each other after AMK Ave 5 collision -- then hug and shake hands
Driver parks car at double yellow line area and gets into heated dispute with man who tries to snap a photo of his vehicle
Guy writes savage letter to neighbour who constantly yells at his girlfriend
Man kicks car and yells vulgarities at driver at Orchard Boulevard
woman scolds special needs child
7-Eleven
rude
unruly