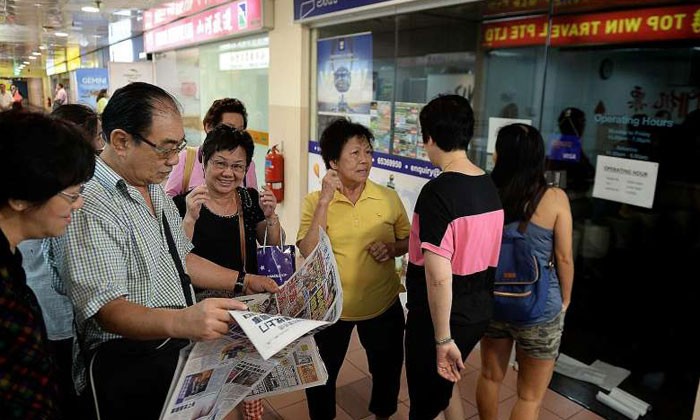 A 68-year-old cleaner, whose holiday plans went awry after a travel agency abruptly closed down, will soon fulfil her dream of seeing snow for the first time.

Travel agent Sky Travel & Tours had suddenly shut down on Monday, leaving Madam Teo - who paid $2,400 for a week-long Hokkaido tour - and other Sky Travel customers in the lurch.

She had learnt hours before her flight on Monday that the tour would not proceed through a text message the agency allegedly sent to its customers.

The team at Klook decided to help her when they read about her plight, said social media and content manager Beatrice Lee, 25.

"We're in the travel business and it is within our power to help," she said, adding that "... it's the holiday season and this poor woman got her holiday stolen from her."

Klook will be meeting Madam Teo and her travel companion, Madam Beh Choon Ann, 80, today to discuss details of the trip.

Said Miss Lee: "Nothing is concrete yet, but we do want to give Madam Teo and her friend a good break."

Scoot will also chip in to fly the two women to Hokkaido.

A Scoot spokesman said: "Scoot is heartened by Madam Teo's hard work in saving up for months to travel to Hokkaido together with her friend, Madam Beh.

"We were therefore excited to come on board when Klook approached us to fly (Madam Teo) to Hokkaido to realise her dream of enjoying a well-deserved vacation there."

The airline is also offering a 20 per cent discount on flights to Hokkaido for those registered on the same tour as Madam Teo, using the promotional code SUREFLY, which is valid until Dec 11.

A reader, business owner Julia Lee, 32, was so moved by the cleaner's plight that she intends to start a crowdfunding campaign to pay for accommodation on the trip.

She suggested raising funds for Madam Teo in a comment on The Straits Times Facebook page on Wednesday, and has received over 100 requests from people interested to contribute. She plans to raise $4,000.

"We're still ironing out the details, Madam Teo doesn't want to handle cash and we also want to be as transparent as possible," she said.

In a statement on Tuesday, the Singapore Tourism Board said it has revoked Sky Travel's travel agency licence.

A note on the agency's office door said that business would resume yesterday, but its Chinatown office was closed when ST visited at 11am.

The agency's business profile with the Accounting and Corporate Regulatory Authority lists its director as Mr Chan Wei Ming and secretary as Mr Ng Meng Kwang.

When contacted, Mr Ng, 43, said he worked for Sky Travel for six months but quit "a while back" and has nothing to do with the company.

He said he only found out about the closure from the news and that he did not know Mr Chan.

When asked why he was still listed as the company's secretary, Mr Ng, who now works at a logistics and catering company, declined to comment.

No one was home when ST visited Mr Chan's home on Wednesday and Thursday.