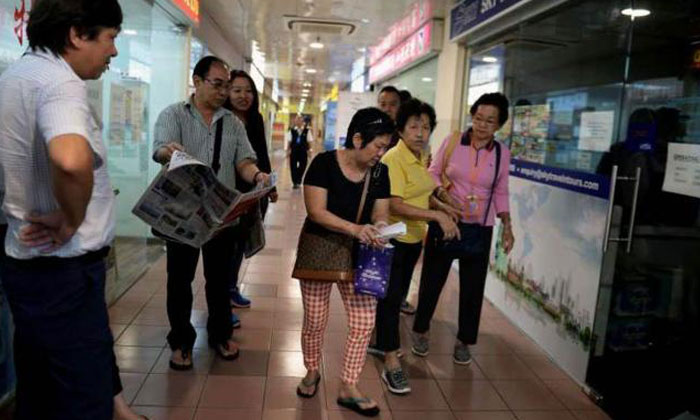 The 68-year-old cleaner had saved up for months and was ready to leave for her week-long Hokkaido tour on Monday night.

The plan was to go to the airport to meet the travel agent who had the air tickets for her group. But hours before the flight, Madam Teo Ino Meo allegedly received a text message from Sky Travel & Tours that it had shuttered and would stop all services immediately.

A visit by The Straits Times at 3.30pm to the company's office in the basement of People's Park Centre found the glass doors locked and the lights off.

A note on the door said business would resume on Thursday. It gave an emergency contact number, but calls went unanswered.

To Madam Teo's knowledge, there were 28 people in her tour group who had made travel arrangements with Sky Travel & Tours. She said she has not been able to get any explanation from the company so far.

Said Madam Teo in Mandarin: "I was so angry. My bags were all packed and I was ready to leave that night."

The Consumers Association of Singapore (Case) said it had received seven complaints against Sky Travel & Tours since Monday.

Madam Teo, a widow, had booked the tour with a friend in August during a travel fair and had paid $500 as a deposit. About two weeks ago, they went to the agency to pay the balance of $1,900, and were given their itineraries.

"They said that everything had been confirmed," she added.

Her friend, Madam Beh Choon Ann, 80, said besides the money paid to the company, she had spent close to $300 on winter wear.

"It would have been our first time seeing snow," she said.

The two women have filed claims with the Small Claims Tribunals and have made police reports. They claimed they met others who had done the same.

Case executive director Seah Seng Choon advised affected customers to try to contact the agency regarding the status of their tour packages, and those who had bought travel insurance, to contact their providers.

"We advise consumers to engage CaseTrust-Natas accredited travel agencies as they are committed to fair trading and transparency towards consumers," he said.