67-year-old man's gravity-defying acts will put you to shame: He once walked 7 hours from Toa Payoh to Pioneer 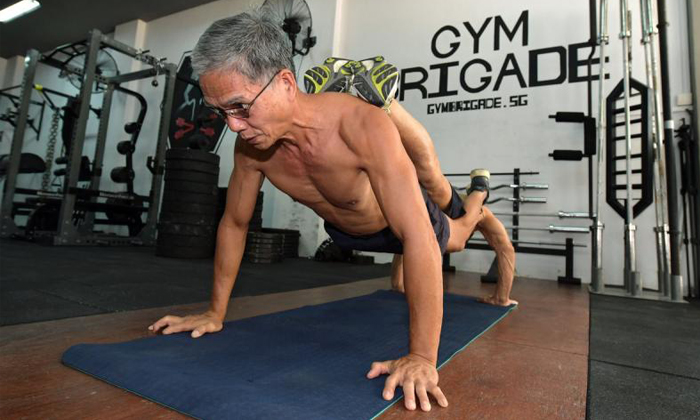 Watching 67-year-old Ngai Hin Kwok execute athletic callisthenics could fool one into thinking that the gravity-defying acts are as easy as tying one's shoelaces.

The semi-retired jeweller makes moves with names like front lever, human flag and muscle-up look like a piece of cake, though in truth they require the strength of one's core, upper and lower body that even young men and women might not have.

Much of this ease comes from decades of disciplined training and an active interest in sports and fitness.

As a 15-year-old living next to a university in Fujian, China, Mr Ngai and his elder brother were influenced by the students they often saw playing table tennis, lifting weights and doing aerobics. They soon followed suit.

The love for all kinds of exercise grew from there. Even as he moved to Hong Kong and then Singapore for work, with a small family in tow, he found time to work out. In Hong Kong, he walked more than two hours from Xi Wan to Bei Jiao; in Singapore, seven hours from Toa Payoh to Pioneer.

Now, the grandfather of two boys and a girl brisk-walks 11km every weekend around MacRitchie Reservoir, participates in the 10km run at the annual StanChart Marathon, and does occasional long-distance cycling, covering anywhere between 10km and 100km each time. This is on top of the 80 to 200 push-ups and squats that he does at home daily.

With plenty of time after his retirement six years ago, Mr Ngai actively sought out like-minded fitness enthusiasts to work out with. Reading about the Gym and Strength Interest Group at Cheng San Community Club in the papers a few years ago, he approached them.

With the team formed in September 2013, Mr Ngai has performed at several public events, including last year's SEA Games. Sometimes they perform with a group of younger callisthenic practitioners, the Bar Breakers. Since its formation, Team Strong Silver has attracted another four seniors into the group.

Being part of the group has given Mr Ngai more chances to interact with youngsters and further his interest in callisthenics.

"When I see youngsters learning new moves, I will try the moves out. If I can do it, I'll do it. If I can't, I won't force myself to. I don't feel afraid when I am learning new callisthenic moves. Even if I fall, I won't be injured as I know how to fall. My legs are strong and I am able to control my falls," he says.

IT consultant Leonard Kwong, 35, a member of Bar Breakers, remembers his first meeting with Mr Ngai. "I was amazed," he recalls. "I was impressed by his strength."

He adds: "He sets a very good example with regard to how age is just a number; that, if you work hard enough, you can be as strong as anyone out there. He didn't get strong overnight. All of us, if we work hard, can achieve great things."

Mr Ngai, who maintains a simple diet and is proud of his fitness level and health, hopes that he will be able to stay as fit in the coming years and continue doing what he does now.